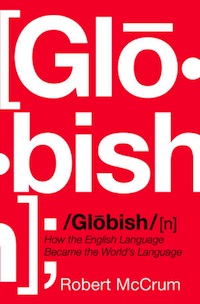 I’m reading the fascinating and cleverly written book about the worldwide spread of the English language:  Globish by Robert McCrum.

Gosh it’s a good read. I am learning a lot, and I’m really enjoying the care he takes with his writing. He uses long sentences (like wot I do) and carefully, sometimes exquisitely chosen words.

Maybe he’s a poet who doesn’t know it? Read this:

Then, in June 1381, scarcely five years into the reign of the young king Richard II, the riotous sequence of popular protest known as the Peasants’ Revolt was a vivid demonstration of the ideas that had been fermenting in the country at large. In truth, these few days of violent dissent were not led by peasants, and were, at least in the early stages, less a ‘revolt’ than a rolling tide of rowdy rustic revelry converging London from Essex and Kent.

Nice. Any writer (or reader) will know that a phrase like “rolling tide of rowdy rustic revelry” doesn’t just fall onto the page.

Also note: Peasants’ Revolt: (a) not run by peasants, (b) not actually a revolt (and all this with the Advertising Standards Authority not invented for another 700 years! Tsk.)

Later in the book, he describes the ‘revolt’: “In a manner characteristic of English social protest ever since, the atmosphere was a mixture of riotous assembly and Cup Final, in which celebrations of a ‘world turned upside down’ were combined with rough declarations of loyalty to the crown.’

And look at the admirably sardonic use of the word ‘thoughtfully’ in this passage:

Richard II never commanded his people as much as he should have done to ensure the survival of the Plantagenet dynasty. Large parts of England were in the hands of some half-dozen barons, any one of whom had the means to challenge the crown. When in 1399 Richard’s cousin Henry Bolingbroke, who had been in exile, landed at Ravenspur in Yorkshire, conducting the first effective invasion of England since 1066, with troops thoughtfully supplied by the King of France, aristocratic rebellion turned into a popular uprising, and finally expressed itself as parliamentary ‘trial’.