« What Is Government Hacking? | Privacy International
Hey kids. Be smart. Be like Todd Barclay. Don’t talk to the police. »

A little while ago I helped a mate extinguish his Facebook profile. He’d had enough of it. In my own case, I run a very limited profile there and often wince when people (‘friends’) post material which refers to me. I see that as adding data points to the humungous conglomerated information that the rapacious Facebook/WhatsApp/Instagram empire is building … on its users.

I admit, this is another case of ‘horses for courses’.  I’m sure there are people who gain enormous value, connection and satisfaction from their interactions with this worldwide (well, banned in China) network.

Build an audience – but for whom?

And I’ve always felt uneasy about ‘building an audience’ at Facebook. News media companies are learning the pain of having their content (yuk) used as bait and engagement-prolonging chow for the monolithic Facebook beast – feeding the very monster which is eating their advertising lunch.

That whole idea: ‘build an audience’ through Facebook while it’s Facebook (not you) who controls exactly what that audience is exposed to, seemed dumb from the start. Also, you obviously want to be able to contact your audience – but, short of artificial promotions to try to capture ‘your’ audience’s contact details, Facebook doesn’t facilitate that except through their channels – ka-ching!

And, what we’ve learned through the comprehensive rorting of the 2016 US election (which is still unfolding) is that Facebook will deliver ‘your’ audience to anyone willing to buy the right to advertise to what Facebook treats as a segment of its billion-plus members, including the fake profiles set up by Macedonian teenagers to peddle fake news, for almost any cause.

That old saying, ‘If you are not paying for it, you’re not the customer; you’re the product being sold’ applies in spades. You pay – with your eyeballs and attention, your data and the information that the monster gathers about you from your interactions with it, and your fellow cellmates.

As for that ‘build an audience’ thing, cartoonist Matthew Inman who posts to theoatmeal.com and is frequently wonderful, nailed it recently: 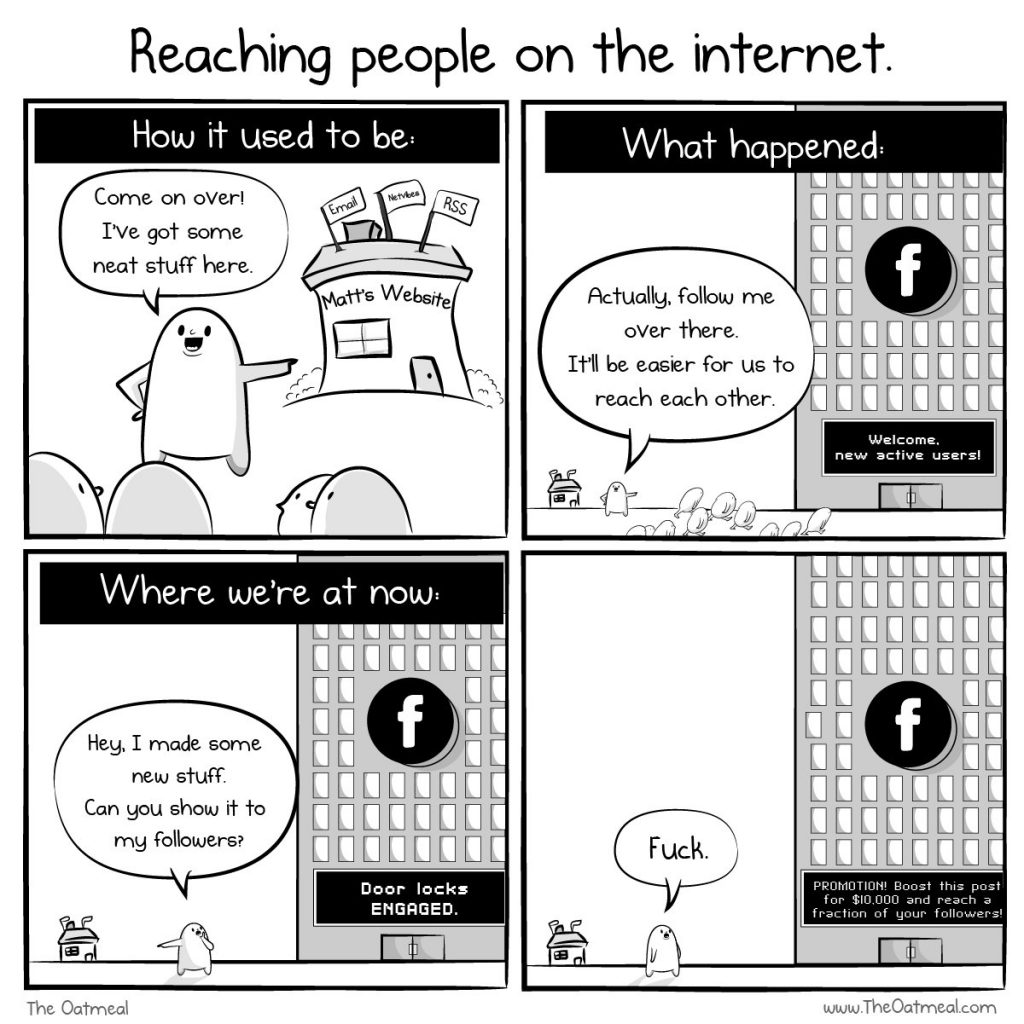 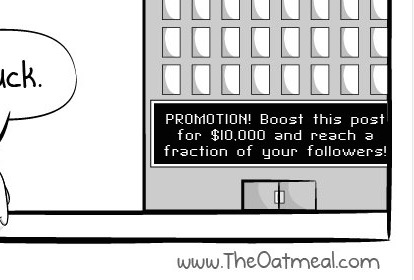 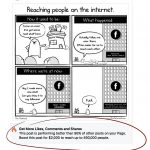 Is this ‘protection racket’ sinister? No, it’s just business.