Hey kids. Be smart. Be like Todd Barclay. Don’t talk to the police. 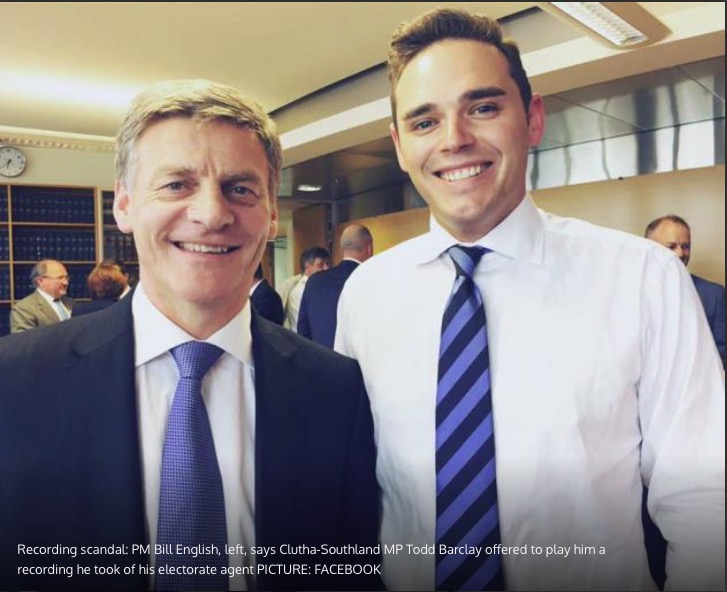 Former National Party MP Todd Barclay will not be prosecuted by police after he once again refused to speak to them.
Police reopened an investigation into allegations Barclay, the former MP for Clutha-Southland, illegally recorded a staff-member after it emerged in July that former prime minister Bill English had been a key witness in the case.
Barclay was accused of secretly recording the conversations of his staffer Glenys Dickson. It is illegal to record a conversation you are not a part of in New Zealand.
Police have now closed the case as they have insufficient evidence. No warrants were executed and Barclay again refused to be interviewed.

I rarely express the thought that our Members of Parliament should set an example for behaviour. They are, after all, just folks like us, put through a rigorous selection process by the political party of their choice and pressed forward in elections with the party’s endorsement and a request that we vote for them.

The Barclay case is interesting because by refusing to cooperate with police (despite, reportedly telling his National Party handlers and the re-selection committee that he had) Todd Barclay has set an example for people everywhere in New Zealand: NEVER TALK TO THE POLICE IF THEY’RE INVESTIGATING YOU.

“During the process my lawyer was asked by police if I wanted to make a statement. We talked about it and decided to decline the police’s invitation, as is my right.”

That expression “as is my right” is worth noting. It’s echoed in the police statement reporting the fizzle end of the investigation, ‘Outcome of re-investigation into Todd Barclay allegations‘

“Police took further steps to interview Mr Barclay who again declined, as is his right.”

So, you know what kids? If Todd Barclay has the right not to be interviewed by the police investigating him, so do you. That’s fair isn’t it?

What’s the lesson we should all draw from this example of how the elite treats law enforcement? Simple: Don’t talk to the police.

And here’s a thoroughly entertaining and excellent (US) law lecture, featuring law professor James Duane and a police investigator, explaining why you should NEVER agree to be inteviewed by the police – especially if they’re investigating you.

PS: Hey look – it’s catching on. Judging by their own media statement the police have picked up Todd Barclay’s signature move: