Europe: the ‘you have to act quickly’ sales pitch?

People who work in sales are familiar with the use of the ‘urgency’ or ‘impending event’ ploy to try to achieve a purchase decision.

The sound of ‘I want to think about it’ is like finger nails on a blackboard to a salesman. Potential buyers use that statement or similar to put some distance between themselves and the perceived pressure of the sales situation. Often, if you watch for it, you’ll see salesmen deploy any of a number of strategies to handle the ‘I need more time to make my decision’ objection.

The salesman’s aim is to convince the potential buyer that the situation is (sometimes artificially) urgent and that rather than go and think about it, the punter needs to ‘sign here now’. The pitch, as Margaret Thatcher used to say, becomes: ‘There Is No Alternative‘. 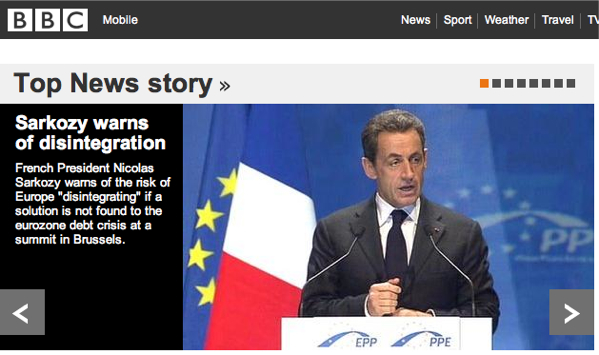 French President Nicolas Sarkozy has warned that “never has the risk of disintegration been greater” for Europe in a speech in Marseille.

He was addressing a gathering of European leaders of the centre right.

German Chancellor Angela Merkel said it would take years to overcome the crisis but “we need to have more Europe”.

EU leaders are preparing for a key summit in Brussels, where they will be trying to clinch a deal on how to tackle the eurozone debt crisis.

The key proposal on the agenda of the gathering in the Belgian capital later on Thursday is how to enforce budgetary discipline with automatic penalties for those eurozone nations that overspend.

Germany and France are pushing for new European Union treaties, saying stricter fiscal rules should be enshrined there.

Mr Sarkozy said Europe was in much danger.

“Never has Europe been so necessary. Never has it been in so much danger,” he said.

“Never have so many countries wanted to join Europe. Never has the risk of a disintegration of Europe been so great. Europe is facing an extraordinarily dangerous situation.” …

—
Analysis
Christian Fraser
BBC News, Marseille
In the closing remarks to the EPP conference, Mr Sarkozy spelt out exactly what is expected of Europe in the coming 48 hours. If there’s a time for speaking frankly he said, it’s now. We have only a few weeks to save the euro.

The tone suggested the German and French leaders are not altogether optimistic of finding an agreement among the wider 27 nations of the EU, but if those negotiations break down he said, then we will have a treaty for the 17 members of the eurozone. Coherence isn’t everything, said Mr Sarkozy, but in political life it counts.

The German chancellor said it was time to put aside national egos and national interest. That sounds a worthy argument but in recent days the smaller nations have complained they’re being forced to follow the agenda of Germany and France with very little room for discussion.

Extraordinary use of language by politicians. They could be absolutely right. The current ‘debt crisis’ may be the biggest threat to the world economy we’ve ever faced. The “danger” may be imminent and the time for bold action, to “enforce budgetary discipline with automatic penalties” may be here, NOW — unavoidable — and there may be ‘no alternative’.

Or it could be a sales pitch.