Do you find John Key’s case for expanding the powers of the GCSB convincing?

Do you find that clearly-scripted (by whom?) statement convincing? Because it seems the New Zealand Law Society (hardly a bunch of far-left conspiracy theorists) doesn’t appear to: 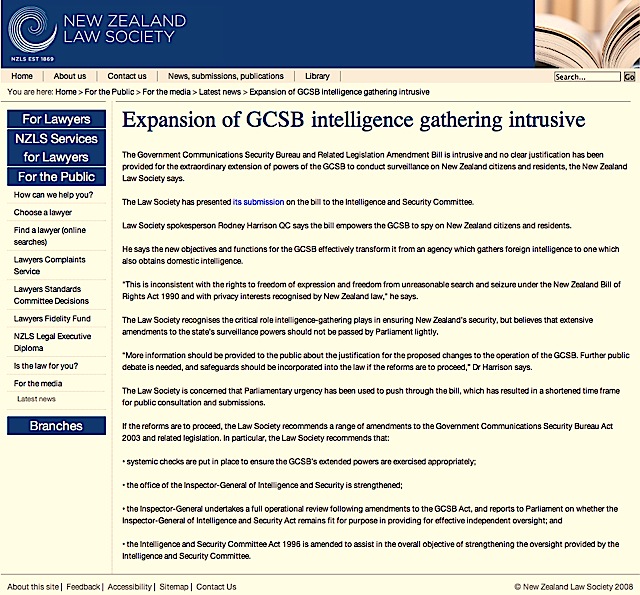 Summary
3 The Bill changes the Government Communications Security Bureau (GCSB) from being a foreign intelligence agency to a mixed foreign and domestic intelligence agency. The Bill empowers the GCSB to spy on New Zealand citizens and residents, and to provide intelligence product to other government agencies in respect of those persons, in a way not previously contemplated and that is inconsistent with the rights to freedom of expression and freedom from unreasonable search and seizure under the New Zealand Bill of Rights Act 1990 (NZBORA) and with privacy interests recognised by New Zealand law.

4 The Law Society’s concerns regarding the absence of clear justification for these changes are exacerbated by the use of Parliamentary urgency, and the consequent short timeframe provided for consultation and submissions. The Law Society is concerned that, in the absence of compelling grounds for urgency, its use degrades the democratic quality of the legislative process.

5 The Law Society recommends that more information should be provided to the public regarding the justification for such changes, further debate should be held regarding that justification, further safeguards should be incorporated into the law if reforms are to proceed, and an updated section 7 report should be sought from the Attorney-General.

6 The Law Society’s submissions on the amendments to the GCSB Act focus on systemic checks that should be put in place to ensure the GCSB powers that are to be extended by the amendments are exercised appropriately. The Law Society also recommends that when the GCSB retains “incidentally obtained intelligence” such retention is required to be certified by the Director of the GCSB. In addition, we make recommendations as to aspects of the drafting of the amendments. …

Read it for yourself.

Speaking personally, the Prime Minister’s case, as expressed in that 14 April 2013 news conference, seems ‘sexed up’ — and redolent of the paltry and manipulative justifications for the ‘coaltion’ invasion of Iraq. (And we all know how well that worked out.)