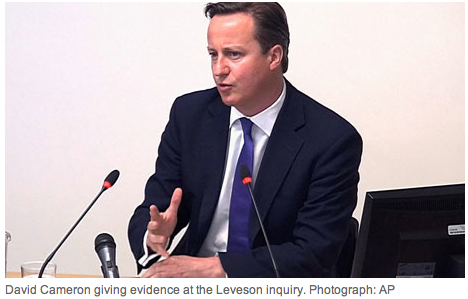 Andrew Gimson, writing in The Guardian, displays a decent, honourable amount of cynicism (in my opinion) describing the efforts British Tory PM David Cameron exerted to try to ‘hose down’ his obviously-cosy-to-the-point-of-symbiotic relationship with News International’s Rebekah Brooks standing in for Murdoch.

Her text (SMS message) with words to the effect of ‘professionally we’re in this together’ 1 seems to ring true to me. I’m not saying he’s a puppet, or that they’ve acted corruptly, however I question his judgement. Andy Coulson, Ms Brooks. I guess it depends on one’s goals.

David Cameron is perhaps the greatest living example of establishment man. In his appearance before the Leveson inquiry, he gave a masterclass in the mellifluous deflection of blame. Cameron’s manners are so good, and his intonation so reasonable, that it becomes difficult to believe – or is supposed to become difficult to believe – that he could ever do anything disgraceful. Like all the best representatives of the establishment, he is not that kind of person.

The prime minister sought with considerable skill to desensationalise the issues facing the inquiry. As he put it near the start of his evidence: “The volume knob has sometimes been turned really high in our press and I’m not sure that does anyone any favours.” Here was a nob, in the sense of a superior person, who was anxious to turn the volume knob back down again. In a judicious yet demotic tone, he advised people to stop getting so excited about Rebekah Brooks and Andy Coulson. …

Excellent. And lessons in there for NZ journalists, commentators (and politicians).

1 “I am so rooting for you tomorrow not just as a personal friend but because professionally we’re definitely in this together,” said the text, which was read out by counsel to the inquiry Robert Jay.
The text was sent a day before Cameron, who was then opposition leader, was due to address the annual conference of his Conservative party in October 2009. Brooks was chief executive of News International at the time. “Speech of your life? Yes he Cam!,”