« Lady Gaga – what a trooper. (Ouch!)
Deploying his establishment charms »

Blind trust? Hang on, isn’t that a ruse?

@badtom “I want to slap their tax-dodging babyboomer snobfaces.” Fine epithet. There are less foul reasons to establish a trust @keith_ng

“I want to slap their tax-dodging babyboomer snobfaces.”

… and it got me thinking.

Although in my view (as I outlined here) there are perfectly legitimate reasons (besides the ‘tax-dodging’ ones) for establishing a family trust, the idea (fiction?) of a trust is sometimes used to hoodwink the ignorant … or deployed as political spin to conceal possible conflicts of interest. 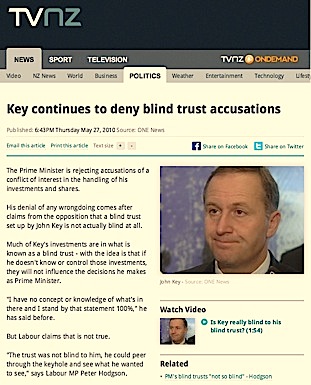 John Key faced some controversy about his blind trust (click)

US Republican presidential contender Mitt Romney got speared with his own words this week, in connection with what some see as the ‘fiction’ of blind trusts which he leaned on in debate about his fitness for public office.

This is an issue with some resonance in NZ politics. In 2010 the Labour opposition questioned the reality and probity of similar arrangements said to have been set up by ’50 million dollar man’ former merchant banker, now prime minister, John Key: a blind trust (see: Key continues to deny blind trust accusations – TVNZ).

I recall there was some argy-bargy about Mr Key (or his trust?) owing Tranzrail shares — NZ Rail, privatized, by a Labour government, don’t forget — and Mr Key’s memory. With a new round of state asset sales on the table/in the pipeline, I wonder if the issue will arise again? Interesting if it did.

Anyway, here’s what went down with Mitt Romney:

On Martin Bashir’s “Clear the Air” segment on Tuesday, he aired a clip of Mitt Romney contradicting his earlier assertions that he had no control over the blind trust with which he made most of his investments. In the clip that aired on Bashir’s MSNBC program, a young-looking Romney spoke into a camera and said “a blind trust is an age-old ruse.”

… “So what does Mr. Romney understand by a blind trust,” asked Bashir. “How does he think a blind trust works in practice? Well, quite wonderfully, Mr. Romney has been completely upfront and crystal clear about what he thinks a blind trust is and how it works.”

Bashir than played a clip of a younger Romney saying that the idea that blind trusts are independent from their investors is a false notion. “A blind trust is an age-old ruse, if you will,” said Romney. “You can always tell the blind trust what it can and cannot do. You give a blind trust rules.”

Here in polite little New Zealand we don’t have a culture of journalists or figures in the media ‘going after’ politicians like Martin Bashir went after Mitt Romney on this issue.