This is a case of the Reticular Activating System in action.

As regular readers will know, here at ThePaepae.com we’re in the middle of a long-running (or on-going?) discussion about political labels, self-identification, partisanship, and fear & loathing of ‘The Other Side’ … 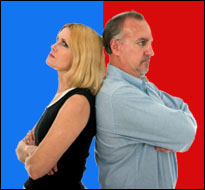 In the middle of a (I would have thought unrelated) comment stream about Marco Arment’s new project‘The Magazine’, the words ‘Fox News’ were thrown as a negative epithet.

I love it (not really) when someone from one group declares monolithically what another group ‘believes’ … as if they know. (Bonus Godwin points for comparing the Obama administration to the Gestapo. Sheesh!)

… The nasty comments about Fox News are a good illustration of the perennial differences between conservatives and liberals in America.

As Edmund Burke noted in his critique of the French Revolution, conservatives believe that human nature and societies are too complex to shape according to a single, overarching idea. A good society can only be built over a long period of time and using the feedback of everyone in the society. It needs many voices. It needs to move slowly and compromise or seeming good ideas will bring great harm. That’s precisely what Burke warned would happen with the French Revolution. and the Great Terror proved him right.

Liberalism, on the other hand, believes in what it used to call a ‘vanguard’–an enlightened few who have seen the future and are leading the rest of use to it (Hope and Change). The strange zeal for Obama, given his thin resume, is an illustration of that. Liberals smile benignly on those who follow meekly along as they ought. They sneer at the reactionaries, who resist, clinging instead, in Obama’s words, to ‘guns and religion.’

In the conservative worldview, the media needs a multitude of voices, including those of liberals. That’s why polls consistently show that conservatives understand liberals far better than liberals understand conservatives. It’s also why, in the liberal universe, there’s no need for a Fox News. But for trivial distinctions, there’s one true and progressive way echoed by the rest of the media news outlets and any other voices are simply inhibiting progress if not outright malevolent–currently the ‘evil rich who don’t want to pay their fair share.’

It’s also why liberal support for free speech is so shallow. ACLU founder Roger Baldwin, for instance, visited Stalin’s USSR in the late 1920s, admitted that the country had no civil liberties, and, in his book, Liberty Under the Soviets, concluded that it didn’t matter, that free speech wasn’t important as long as progressive thought, meaning communism, could speak freely.

We saw that most clearly recently when the Obama administration responded with frustration that they couldn’t silence a shoddy trailer for a film that opposed a current liberal and a Obama administration theme–that Islam, even in its politicized variety, is a ‘religion of peace.’ Instead, they resorted to a Gestapo-like, middle-of-the-night raid on the film’s producer on alleged parole violations. That should have made your blood run cold.

One result of the cloistered liberal worldview is that they’re often caught off guard by events, as demonstrated by last week’s presidential debates. I spotted almost from the start that Obama was an empty suit (or chair), that he used words with no awareness of their meanings. But for four years, liberals have been fed a contrary point of view–the teleprompter driven Obama–from their media.

Only Fox has offered a counter-narrative to this O-worship, and that’s why they hate it.

The same is true in other contexts with a lot of tech journalism, something I hope Marco Arment will address. A lot of it is really silly and shallow, gushing over some new gadget much like liberals gush over empty words about hope and change.

I recent heard one prominent NY Times techie commentator gush that soon we might have an iPhone so thin it could be rolled up. “Stupid,” I thought to myself, “why would I want a phone that rolls up, becomes a bulge in my pocket, and is a pain to unroll and use?”

Of course, I’d live with a rolled up iPhone, no matter how stupid, if we could just dump Obama and his Chicago political machine come November 6.

And for what it’s worth, I don’t even get cable with Fox News. I just happened to think that dissenting points of view matter. — Michael W Perry

Amazing. Bear in mind this was in a comment stream on tech site GigaOm. Oh boy. Evangelism.

PS For the record, I value dissenting views, short of hate speech, defamation and lies.