« Blast from the past has lessons for today
Moral courage and standing in scorn, part 2 (in love) »

Bradley Manning – out of place in the US army? 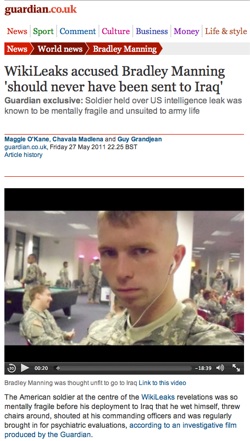 The Guardian has produced a video of their investigation into the background of accused WikiLeaks source/security leaker Bradley Manning, showing he was (apparently) regarded as mentally and socially unfit to be deployed to Iraq. It reveals that Manning’s discharge from the army prior to deployment to Baghdad was reversed because of the severe shortage of recruits in the US military as it engaged in wars in Iraq and Afghanistan.

The video is worth watching, although the dark, prowling-shark type soundtrack is a bit OTT.

At one point, according the film, the army removed the bolt from his rifle as he was thought too risky to be in charge of a working firearm. I’m struggling to think of a comparable metaphor for a statement of ‘not-fit-for-duty’ in the corporate world. Taking a cell-phone from a travelling salesman? Taking a calculator away from an accountant? Taking a hose away from a fireman? Scalpel from a surgeon?

I think the subset of human beings actually ‘suited’ to being in the Army (purely for the sake of a college scholarship in his case — not an uncommon motive) is a pretty small group. Encouragingly small.

I did not know Manning was gay until I watched this video. He was considered a ‘runt’ at just over five feet — and, naturally, abused and persecuted as a weakling during training — and regarded as ‘highly intelligent’. OK, that’s a recipe for trouble right there, don’cha think?

In the end, Manning’s undoing was not his mental ‘fragility’ nor his anti-social behaviour like punching a (female) officer in the face … but his online chats with a famous hacker who turned him in and alerted US intelligence about his claims to have leaked info to WikiLeaks were his undoing. The court martial is still a long way off — in the meantime, it seems, the persecution of the runt continues.

Here’s a link to the video .