« ‘Ethnic cleanser’ Mladic will face trial
Bradley Manning – out of place in the US army? »

Blast from the past has lessons for today

A very clear and loud whistle was blown … 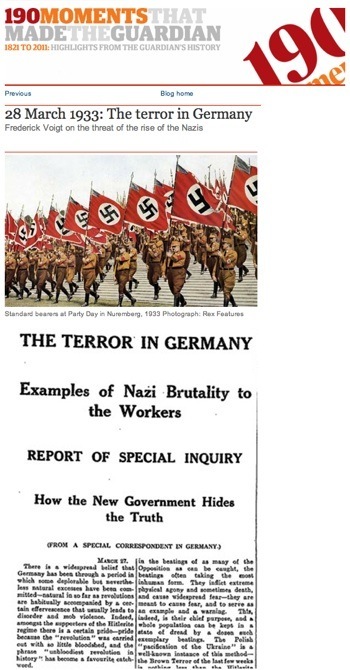 Wow, this was published in The Guardian in 1933 and Europe still tried to appease the Nazis. Amazing. (Click to read the archive.)

Born in London from German parents, Frederick Voigt was the Manchester Guardian correspondent in Germany from 1920 to 1933.
Voigt was one of the most important of the newspaper’s foreign team in the 30s, becoming famous for exposing the threat of the Nazi regime

Today, when news of Mladic’s arrest on war crimes/massacre/ethnic cleansing charges, it’s worth reading Voigt’s original report as published in 1933, and reminding ourselves that xenophobia and persecution of ‘the others’ is not a new thing.

How bad does it have to get before we speak up or act? These are today’s challenges too, judging by the conflagrations and uprisings in North Africa and the Middle East.

‘History doesn’t repeat itself, but it does rhyme.’
– Mark Twain