« It must be true. I saw it on the internet.
The irresistible urge to “right wrongs”… » 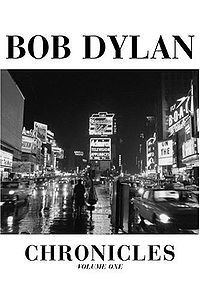 Just read it. Wow, what a beautiful book. Some of the writing is exquisite, and the insights into his journey, his influences and his drive to be the musician he wanted to be are extraordinary.

His homage to Woody Guthrie and later Robert Johnson are brilliantly convincing, and it’s worth reading the book just for them. An episode he related where a folk music expert/historian tried to tear down Dylan’s confidence and his ‘mission’ to bring Guthrie songs to the new generation (my interpretation) is a powerful lesson — not least because of how Dylan tells the account, and his despair. This guy’s proffering of un-asked-for advice — even down to playing Dylan records by musicians who were further along the Woody Guthrie path than even Guthrie — has parallels. We all run into ‘dream stealers’. How we deal with them is what counts.

Much has been made elsewhere about the strong, explicit disclaimer Dylan makes in these pages about never wanting to be the ‘leader’ of a great social revolution and the very real and rational fear he held for his own and his family’s safety.
It is easy to underestimate the powerful visceral message the four high profile political assassinations of the 1960s (JFK, Martin Luther King, Robert Kennedy, Malcolm X) sent to that generation, viz: “Stand up, speak out and someone will kill you.”

Great book. Get it, read it. Fabulous.