« So, pilots can use iPads during take-off … when can we?
Nice – Positive compilation of Russian dash cams »

People get drunk and obnoxious, some every weekend. But thrusting your freshly-printed Parliamentary business card in the face of a waiter who has judged you to be too intoxicated for continued wine service, then proving it by threatening the have the Prime Minister’s Office (!) terminate the “dickhead” waiter’s employment — that’s a special level of dickheadedeness.* 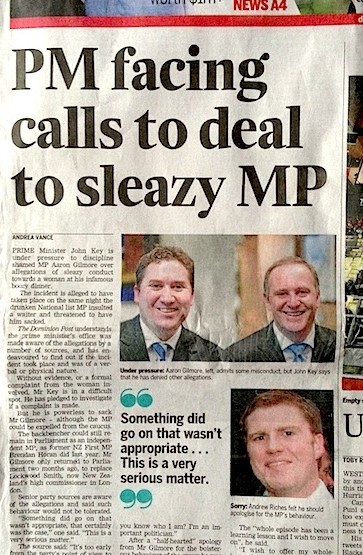 Still, the affair has provoked some fun in the media. My nominations for the inaugural Aaron Gilmore ‘Who’s the dickhead?’ awards are as follows :

“I am the last person to criticise someone for getting rolling drunk. …”

“The trouble for National is that Gilmore has played up to exactly the sort of born-to-rule Tory, I’m-more-important-than-you stereotype that John Key has worked so hard to dismantle. What makes it even worse is that Gilmore is a political nobody …”

How one lives a public life is a test of character.

PS Other nominations and suggestions welcome in comments.