So, pilots can use iPads during take-off … when can we? 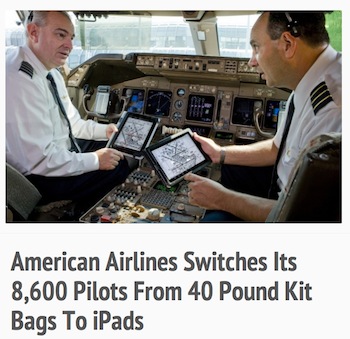 I remember posting the news way back in February 2011 that an airline had approved the use of iPads for flight plans (Had to happen: iPad approved for flight plans) then in July ’11, that Airbus offers iPad Electronic Flight Bag solution … but it’s been a long time coming.

Yesterday I caught up with the news American Airlines pilots given green light to use the iPad during take-off.

Which is funny, because last week I talked with an Air NZ pilot who told me our national carrier is still leery of officially using iPads although plenty of pilots use them on the flight deck. He told me something a lot of pilots use iPads for is navigating to the correct terminal gate in big (big!) airports — the built-in GPS helps the co-pilot ‘see’ where the plane is on a virtual map of the airport.

Of course, anyone who’s used a GPS knows they sometimes steer you wrong (like, in my experience, “Turn left now” … Errr, you mean into that paddock???) and sure enough, the pilot I was talking to indicated similar errors occasionally happen to them. And, he said, sometimes the terminal map app (poetry!) loaded in the iPad isn’t the latest version — which of course is even more likely to be a problem with printed maps, huh?

What struck me about the American Airlines announcement was this:

The iPad replaces 40 pound kit bags with over 3,000 pages that include terminal charts and flight manuals that can now be updated digitally. It’s little surprise then that the change is being welcomed on all sides.
“We’ve reduced the single biggest source of pilot injuries, carrying those packs,” said Patrick O’Keeffe, VP of Airline Operations Technology at American during his Tablet Strategy keynote. “And we are now able to save $1 million in fuel costs and stop printing all the page revisions.”

Next questions: So if pilots can use their iPads during take-off (actually, during ‘all phases of the flight’) when can we?