‘a good way to divert attention from the uproar over the N.S.A.’s data-collection programs’ 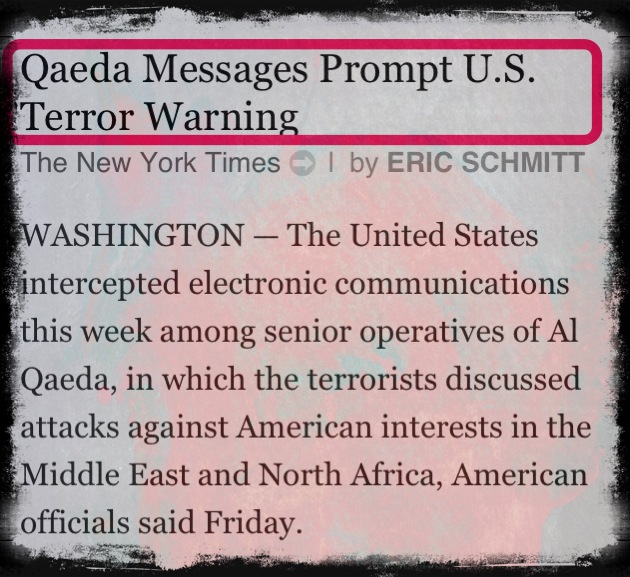 It’s really hard not to see this, from the New York Times in the context of my posts Justifying mass surveillance with ‘terror threat’ is a right wing talking point

WASHINGTON — The United States intercepted electronic communications this week among senior operatives of Al Qaeda, in which the terrorists discussed attacks against American interests in the Middle East and North Africa, American officials said Friday.

The intercepts and a subsequent analysis of them by American intelligence agencies prompted the United States to issue an unusual global travel alert to American citizens on Friday, warning of the potential for terrorist attacks by operatives of Al Qaeda and their associates beginning Sunday through the end of August. Intelligence officials said the threat focused on the Qaeda affiliate in Yemen, which has been tied to plots to blow up American-bound cargo and commercial flights. …

Fortunately, having been burned by the ‘sexed-up dossier’ of the Bush/Blair era justifying the Iraq invasion, and years of Crosby|Textor-type spin, there’s some skepticism:

… Some analysts and Congressional officials suggested Friday that emphasizing a terrorist threat now was a good way to divert attention from the uproar over the N.S.A.’s data-collection programs, and that if it showed the intercepts had uncovered a possible plot, even better.

As respectful as I am of the New Zealand prime minister John Key’s communication skills, I have never seen him as a particularly creative person.

His reported hiring of political campaign strategists/spin doctors Crosby|Textor (the team whose tactics — ‘dog-whistles’, wedge issues; ‘inoculations’; talking points; evasive, relentless ‘things that matter’ messaging instead of answering the question; identifying and smearing your opponents’ strengths; swallowing dead rats; etc — were revealed in The Hollow Men) indicated to me that Mr Key is a formula follower rather than an original thinker. Perhaps I’m being unfair, but it fits.

Indeed, when confronted with skepticism, Mr Key’s salesman’s negotiation style, and his strategy of progressive, grudging admissions, and gradual abandonment of his previous, implausible-appearing narratives as they fail to convince (e.g. his extraordinary involvement in school friend Ian Fletcher’s appointment as head of the GCSB — so reluctantly admitted to) indicates to me he is someone whose approach to political management relies on strategies and use of a ‘play book’.

The Key/Joyce administration has been seen by many, including me, as characterised by competent political management — I’ve discussed that strength here plenty of times. But the corollary of that is: they’ve been perceived as ‘calculating’ and ‘cunning’ — and users of machinations (hence, Crosby|Textor-style tactics).

A certain wiliness, an if-not-deceptive-at-least-selective-with-the-truth mystique has seemed part of their shtick.

But political management and what I previously identified as National’s ‘slippery business ethics’ approach to government are no substitute for operating based on sincerity and political principle . See:
John Key is getting a reputation as a liar. (That perception and issues of ‘truthfulness’ and ‘sincerity’ are a problem for Judith Collins too — at its heart — but we’ll discuss that another time.)

Anyway, how interesting to see deployment of the tried-and-true old tactic: Raise the DefCon; Get the news media foaming, ‘OMG! A terrorist threat!’ to distract from or justify surveillance and the interception of your citizens’ private communications — both in the US and New Zealand, isn’t it?