« A profile of John Gruber
Paradox »

A friend’s lament – from FB to newspaper

A new version of the clichéd reporter’s question: ‘How do you feel?’… 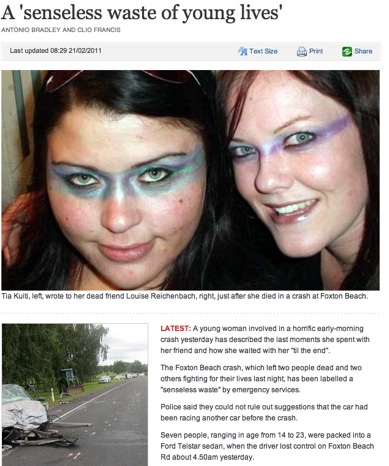 I don’t know the background, but I observed this morning that a young woman’s lament on Facebook about her friend’s death in a car crash was reproduced on a news website, along with a photo purportedly of the two of them from the young woman’s FB profile.

The car accident, described (accurately) as a ‘senseless waste of young lives’ happened over the weekend, with 7 young people in a 5 seater car which rolled and crashed … two dead, two injured.

Here we are Monday morning and some news reporters are (apparently) trawling through the survivors’ FB pages — as if that’s a development in the story? It seems a bit off to me.

LATEST: A young woman involved in a horrific early-morning crash yesterday has described the last moments she spent with her friend and how she waited with her “til the end”.

Then, the story quotes the survivor’s lament/farewell to her friend in full, except for a censored swear word.

Yes, I know, before you say it, I know this survivor’s FB page is open to ‘everyone’ i.e public, (for now) but even so, … it feels a bit like quoting from someone’s diary, doesn’t it?