A cynical definition of ‘journalistic balance’ 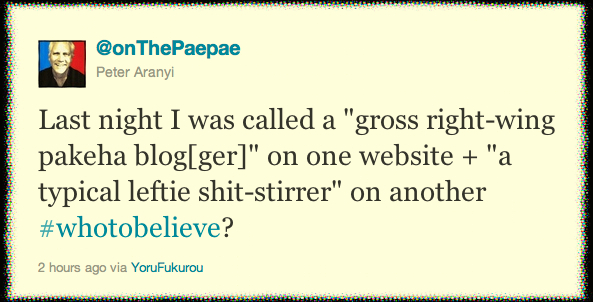 Last night I was called a "gross right-wing pakeha blog{ger}on one website + "a typ­i­cal leftie shit-stirrer" on another...

This double-headed response to my musings reminded me of a conversation I had with Richard Long, then The Dominion’s Parliamentary bureau chief, later the paper’s editor, and even later Spin Doctor for two under-achieving National Party Opposition leaders, Bill English and Don Brash.

Richard, a Press Gallery veteran if ever there was one (20 years? Famous for refusing to drink the Muldoon/Birch ‘Think Big’ kool-aid) explained his interpretation of ‘journalistic balance’ like this:
He told me he would alternate the focus of his stories/columns … so that one would piss off the Government, then follow it with one which would piss off the Opposition.

Nice theory (even if he was serious) but I couldn’t bring myself to apply it to my work for Radio New Zealand.