I said this about Winston Peters in A voice in the wilderness? Or reclaiming the Grey Power mantle? in April:

This man has come back from the dead before. (Just sayin’.)
Don’t underestimate his political instincts and populism. 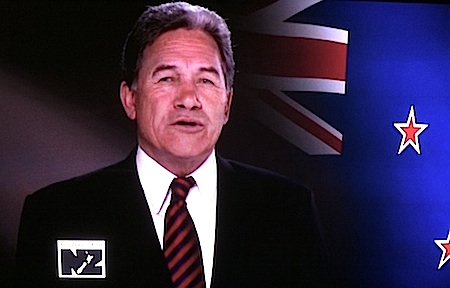 Winston Peters. The closest thing we have to a natural politician. Loathed by many in the National Party and by others who seem to think some votes shouldn't count.

Since then, Peters has continued to cause a ‘disturbance in the Force’ and ruffled a few feathers among some in the political intelligentsia who thought (wished?) Peters was finished.

To the horror of all sorts of people, Peters is once again being talked about as a ‘kingmaker’.

Personally, I see that label as almost an anti-MMP attack line. We discussed that campaign’s fixated, Don Quixote-esque flexi-bendy-elasti treatment of truth and democratic fact (i.e. in my view winning 13% of the vote earns you some clout)  earlier.

“… I was alerting readers that Peters — who I still regard as arguably the most naturally talented politician of his generation — was a complex operator, and a man of many shades. Someone to watch.”

Yeah. That hasn’t changed either.