Just the sort of endorsement a political journalist doesn’t need

Cameron Slater already knows I think he’s a blinkered, partisan, irrationally aggressive National Party mouthpiece/toady/apologist/rottweiler. He knows because I told him. I guess it’s possible he may also have a bad side?*

But it intrigued me this morning to see Cameron’s (cough) selective re-tweets of a couple of political journos’ “reviews” of the Goff/Key press.co.nz leaders debate last night.

My own review is superfluous to requirements, but here it is: I watched it and thought it was pretty even. It occurred to me that I could see exactly why Mr Key had limited his exposure to such interchanges, and I observed Mr Key deploy his (Crosby|Textor’s?) talking point about an [alleged] ‘hole’ in Labour’s figures … classic electioneering. (Hasn’t our wee lad developed? He’s virtually just like a real, grown-up politician.)

We’ll hear more of that line, I’m sure, given the breathless credulity finely balanced and nuanced consideration of commentators like these two (below). In fact Gerry Brownlee was slipping it into a Radio NZ news story on Labour’s EQC policy this morning. What a coincidence. They’ll hammer it. And fair enough. 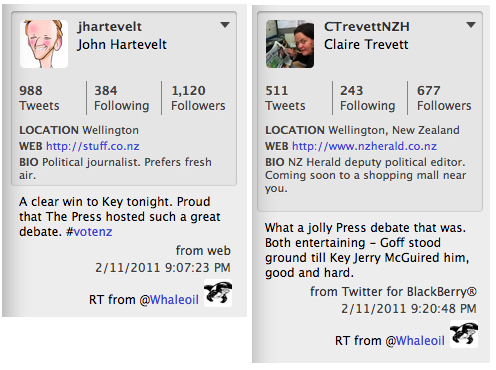 But, for some reason, Cameron hasn’t ‘pumped’ this review from the Otago Daily Times … (although it was the top story on the Google News feed when I checked this morning… 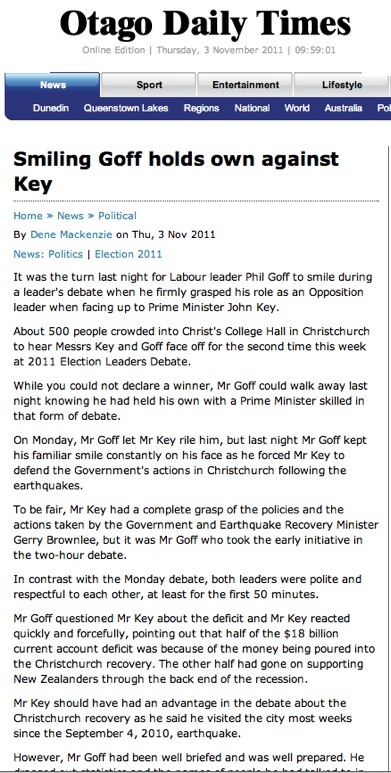 Funny, I kinda saw it pretty much the same as the ODT did. (click)

Never mind. People will make their own minds up without being ‘told’ who they liked more.

Final note about the debate:
Much better format than the claustrophobic, ADHD atmosphere of the TVNZ offering earlier in the week. Unlike Monday’s debate, the leaders were largely  left unmolested to develop their arguments. The stage set was far superior to TVNZ’s which needlessly emphasized the role of their nearly gravitas-free Guyon Espiner. The off-stage antics were far fewer. And the lively audience added a lot. (Still, not a patch on Muldoon-era [1980s] brawls and debates. If you don’t mind me saying.)

* with apologies to Hunter S. Thompson.