« This disgusting ad from the NRA is *meant* to offend us.
Bunfight at Howick Local Board »

Some malicious drongo with too much time on their hands is pretending to be NZ Herald reporter David Fisher on Twitter, closely mimicking his real Twitter account @Fish_NZH, which is one I follow. (UPDATE: As you’ll observe in the comments below, David Fisher renamed his Twitter account to @DFisherJourno … And the deceitful impostor renamed his/her/its to @FisherJourno. Spot the pattern.) 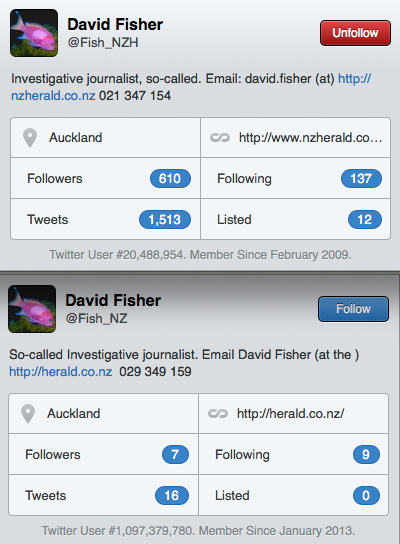 Someone deceitful has gone to a little effort to impersonate David Fisher on Twitter.

Now, this is No Big Deal. I’m all for parody and satire. Laugh it up. Nobody thinks Steve Braunias’ ‘Secret Diary of …’ columns are real. But impersonation crosses the line, as I have said before (Anonymous comment vs IMPERSONATION). It is a step too far, in my view, and is an indicator of a level of personal dishonesty which disqualifies the user from being taken seriously in a debate, or it should.

I’ve had my own run-ins with legends in their own lunchbox who imagine they’re internet ninjas. See Internet ninja cowboys … spoofing revisited.

Dishonesty is never a winning strategy, culture war or not.