There goes the whole appeal of Facebook for some personality types … well, not really 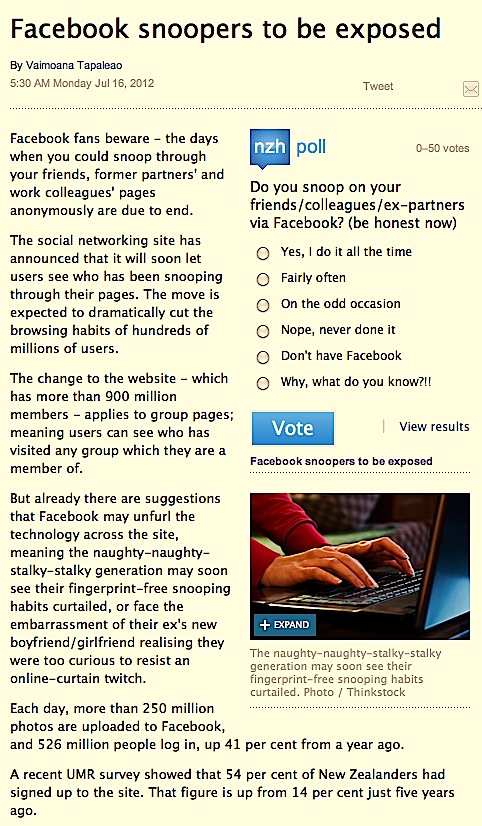 In the same way that locks are only really designed to keep out honest people, this ‘dramatic’ change to how Facebook operates will, in reality, be of minimal effect.

With Facebook, like everything from cars to massage oil, how you use it makes all the difference. And how you use it reflects your character, in my opinion.

There are plenty of fake profiles and stalking going on. Not just ex-spouses etc. Some social media battledogs like you-know-who admit they create fake profiles to ‘follow’ or ‘friend’ (as a verb!) their prey. We’ve seen that.

The rather odd spectacle of former ACT acolyte Clint Heine being pursued by an online adversary … now in the ongoing trainwreck of a couple of comment threads here at The Paepae (of all places) should be instructive.

Fake people are not the same as anonymous people, as I tried to explain here. Sometimes there are good reasons to remain anonymous.

But with impersonation, unless it’s art or satire (like the absolutely-superb-by-anyone’s-standards parodies: @DrBrash or @MayorEmanuel) the deceit is fatal to credibility (e.g. property spruiker Sean Wood’s sockpuppet performance as his own satisfied customer ‘MUFFIT’).

Call me naive (I’ve been called worse) but I put astro-turfing, the faking of grass roots support or a ‘movement’ in the same class. Deceit.

Facebook, so much a part of hundreds of millions of people’s lives, will of course, reflect humanity’s greatness and our wretchedness. What else should we expect?