The Internet, Robin Hood, and his Merry Men

Let me tell you a fairy tale, if I may. 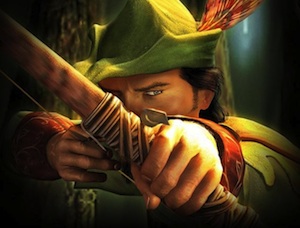 There was once a man named Robin Hood and he had a band of Merry Men, and yes there was also a Sherriff of Nottingham, and a contingent of motley Hench men.

One day Robin Hood and his Merry Men did something very bad and hurtful to Nottingham and cost Nottingham tens of millions of dollars. Damage in hand, Nottingham approached the Court of the land and received a cease and desist order and the right to subpoena, not just the data from the Merry Men’s computers, but also the very great internet servers of Yahoo and Google, which lay far beyond the borders of Sherwood Forest, but regardless, Nottingham got what he needed.

There was one computer that Nottingham was very interested in getting his hands on, and that was that that belonged to Friar Tuck, Robin Hood’s chief of communications. The good Friar had been a thorn in the side of Nottingham for years. Tuck had devised a simple communication tool for the Merry Men to keep in touch. The Good Friar simply took the individual emails that had been sent to him from each of the Merry Men and incorporated them into one giant email which he named “The Friar Tuck Letter” and then sent it out to all of the Merry Men who lived at each of the four corners of Sherwood Forest. This way the Merry Men would know what each was doing, and how each was coping with Nottingham’s cruel and unyielding rule. While this unusual communication tool was not sanctioned by Robin, Robin was happy with the arrangement all the same; Tuck was doing good work.

After the subpoenas of the Yahoo and Google servers I was gravely afraid, for this is where I served Robin Hood. By utilizing the Financial Message-Board services of these companies I was able to inform the population, beyond the borders of Sherwood Forest, of the Merry Men’s plight. Fortunately for me, when a Judge of the Land serves a cease and desist order it gives you a time frame to, literally, cease and desist. And this is what I did – but it scared me all the same. Because, damages – quantifiable damages with very real dollar values attached to them could have been awarded to Nottingham and I may have been held accountable for some of those dollars. So, from that point on I decided it would be safest for me to hold my tongue and keep my opinions to myself – and even though Friar Tuck insisted I participate, I resisted. Unlike, Tuck I had a family to think about. A few weeks later, after the cease and desist order went out; twenty or so of the Merry Men were rounded up and dragged into Court before a Judge. Following closely on their heels was a toad of a newspaper reporter (a nasty thing kept in the bottom drawer of Nottingham’s dirty underwear closet) who cast lies and other aspersions about the personal lives of these Merry Men to the greater public of Sherwood Forest and beyond.

About a year later the politics of our little war swung positively in our direction. Nottingham was put on the spot, and Robin Hood and his Merry Men were vindicated at last. But, with this vindication came a great time of stress for us all, and Friar Tuck and some of the Merry Men, me included, sought exile in Europe. While in Europe, Friar Tuck appointed a younger man, Will Scarlet, to work as his scribe during his absence.

As the months dragged by I noticed a disturbing trend in the work of the young scribe. Also too, alarming communications were coming from Robin Hood himself. Incredibly, as our time of stress grew it appeared that our very own Robin Hood was beginning to sound more and more like the evil Nottingham. Soon, arguments broke out amongst Robin Hood’s closest lieutenants. Robin did not hesitate; he replaced the dissenters.

I discussed my concerns with Friar Tuck. He would not listen – try as he might — he could not believe that Robin was singing the same tune as Nottingham. Rather, the Good Friar believed that Robin was acting in the best interest of all.

And the pressure mounted!

The days shortened and our battle drew to a close. In my mind a horrible and unacceptable compromise was about to be struck. There were only three days left until a decision was to be made…

…and in horror I watched as the apprentice Scribe, Scarlet, stacked the daily two hundred or so emails, unashamedly, in such a manner that placed pro-Nottingham and other compromise-like-emails to the top of the list – I became incensed. I discussed my concerns with Friar Tuck but still he refused to shut-down Will Scarlet and retake control of his press.

So, with only two days to go I sat down and wrote a 5 line email to Scarlet – it was clear, succinct and to the point. My years ascribing a particular view point to the masses on the mighty servers of Yahoo and Google were put to good use!

The next morning, when “The Friar Tuck Letter” arrived, and where there were normally 200 or 300 emails attached, only a single email was posted – my email — and the cryptic words of Will Scarlett underscored it, “I can’t do this anymore, I’m leaving” he wrote.

Friar Tuck was furious with me. The Merry Men were confused – what had happened? What was going on? Where was Tucks’ famous letter? And who wrote this scathing and unpatriotic email to Will Scarlett? Because, I should add, Scarlett, had had a least one shred of decency left before he abandoned Tucks “Letter”; he removed my name from my email. And now with only one day left – the Merry Men felt lost and abandoned. And I was to blame. Not only that — where was Will Scarlett? No one had seen him since he had received my missive. Tuck sent one of the fallen lieutenants to find him. But Scarlett was gone.

During this time I believed that I may have hurt Scarlet — and I did – but not mortally, thankfully. His ego, pride and character were damaged. With just a few lines my email cut him to the core of his being – as was my intent; for you see – Will Scarlet looked on me as a friend. A week or so later he emerged safe but embarrassed. Because, as it turned out, I was right – I had unearthed a corruption — but then that is a tale for another time.

As an end note to this little Fairy Tale I should add that, those of you who wonder why I encourage hugs and coffee, instead of adding more fire to fire. It is because of Will Scarlet’s disappearance that week. I thought perhaps he may have hurt himself. As odd as it may seem, stress, and by stress I mean back-breaking soul-crushing stress, can drag any man into the deepest and darkest recesses of despair. A simple and cruel (and designed to be cruel), even if accurate, email could be the tipping point between life and death.  I try to be more careful these days.  I ascribe to the old adage of attracting “more flies with honey” and to this date it is a mantra I keep.  But, sometimes, just sometimes, vinegar liberally applied, can be used to get attention – but be careful!

The morals of this story:
• Computer communications are never safe. Even here at “The Paepae” we are quite transparent.
• Words can be used as weapons. Words can damage. And if that damage can be turned into a quantifiable dollar value, and then assessed as such – it can be awarded in a proper Court of Law – to a plaintiff — regardless of whether that plaintiff is a good guy or a bad guy!
• Like it or not, the Law is not a balance between right and wrong, but rather, what is legal and illegal – and many times the Law is used as a political tool by the Nottingham’s of this world to manipulate and subdue good people of a Sherwood Forest somewhere near you.
• Words are too precious to be weapons. Hurt no one, embrace.

Good night sweet children – be ever vigilant – and mind your P’s and Q’s.