Sue Kedgley on trench warfare and the value of MMP

A worthwhile interview between Sean Plunket and retiring Green MP Sue Kedgley was broadcast on The Nation today. I’d seen reports of her valedictory statement with ‘parting shots’ about Parliamentary ‘trench warfare’ and nodded in agreement.

Much of the time it’s trench warfare in here,” she told Parliament. “The aim is to do battle, to defeat the enemy on the other side, not to debate or to listen. The heavy hitters, the point scorers and the alpha males lead the charge, and hurl abuse and insults at the other side.
Question time, which ought to be a showcase of our democracy, routinely degenerates into a pointless slanging match.” — Sue Kedgley, quoted in NZ Herald 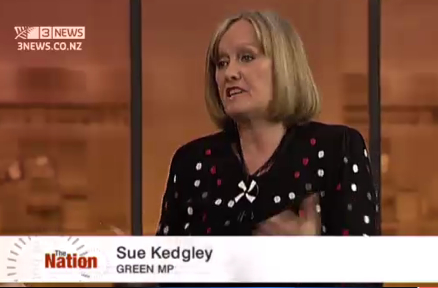 Watch video of today’s The Nation interview at 3news.co.nz

Is parliament all about point scoring? Or is it actually about holding the government to account? Is it about tribal warfare? — Sue Kedgley on ‘The Nation’

One of MMP’s great benefits … is that it has made Parliament more democratic and more accountable. — Sue Kedgley on ‘The Nation’

I found it interesting that she talked about ‘tribal warfare’ and the (pointless?) point-scoring behaviour of MPs. I see reflexive and ritual political partisanship and tribalism as the cause of so much energy-wasting conflict — not aiming at better solutions but merely demeaning, knee-capping and displacing one’s ‘opposition’.

I wish Kedgley well in this next chapter of her life.