More from Michael Lewis on the success of Dr Michael Burry… 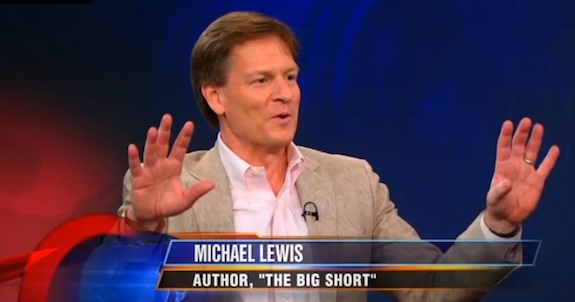 'The Big Short' author Michael Lewis "talks about a one-eyed man with Asperger's syndrome who made money by betting against the subprime mortgage market". Click to watch video at thedailyshow.com

[Big finance firms selling sub-prime instruments] create lots of risk. The only way you get that risk out there and get people to take it is to disguise it. So they got really good at disguising the risk and they got so good they disguised from themselves. They fooled themselves. Sort of like if you tell a lie often enough you’ll start to believe it. That’s basically what happened on Wall St.

and, when they began to get wind that a sub-prime collapse was inevitable…

Oh no, It doesn’t occur to anybody [in the big finance firms] to say,’This is wrong we’d better stop doing it.’ That doesn’t compute. That’s not a thought that would occur to a Wall St trader. They thought ‘this is a good bet we’ll make money from it’….

Lewis goes on to point out that the people who figured it out, like Michael Burry, were “shouting the place down, but nobody was listening to them because they had one eye and Asperger’s syndrome”.

Watch the full interview with Jon Stewart (6 mins) at thedailyshow.com

The slippery selective ‘morality’ (we discussed here and here) sooo reminds me of some of the ‘personalities’ hyping themselves as ‘experts’ and ‘gurus’. If you know who I mean.