« Quote of the week
I love geeks »

Asperger’s. Of course. Are we surprised? 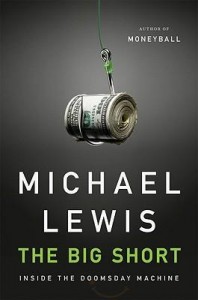 Michael Lewis takes an unexpected corner in this excellent book extract about the bursting of the (US) subprime bubble.

From his new book The Big Short (they’re ALL very good, from Liar’s Poker onwards), this chapter Betting on the Blind Side is about a gutsy, insightful fund manager called Michael Burry. This extract at Vanity Fair. Worth reading.

Not long before, his wife had dragged him to the office of a Stanford psychologist. A pre-school teacher had noted certain worrying behaviors in their four-year-old son, Nicholas, and suggested he needed testing. Nicholas didn’t sleep when the other kids slept. He drifted off when the teacher talked at any length. His mind seemed “very active.” Michael Burry had to resist his urge to take offense. He was, after all, a doctor, and he suspected that the teacher was trying to tell them that he had failed to diagnose attention-deficit disorder in his own son. “I had worked in an A.D.H.D. clinic during my residency and had strong feelings that this was overdiagnosed,” he said. “That it was a ‘savior’ diagnosis for too many kids whose parents wanted a medical reason to drug their children, or to explain their kids’ bad behavior.” He suspected his son was a bit different from the other kids, but different in a good way. “He asked a ton of questions,” said Burry. “I had encouraged that, because I always had a ton of questions as a kid, and I was frustrated when I was told to be quiet.” Now he watched his son more carefully and noted that the little boy, while smart, had problems with other people. “When he did try to interact, even though he didn’t do anything mean to the other kids, he’d somehow tick them off.” He came home and told his wife, “Don’t worry about it! He’s fine!”

His wife stared at him and asked, “How would you know?”

To which Dr. Michael Burry replied, “Because he’s just like me! That’s how I was.”

Their son’s application to several kindergartens met with quick rejections, unaccompanied by explanations. Pressed, one of the schools told Burry that his son suffered from inadequate gross and fine motor skills. “He had apparently scored very low on tests involving art and scissor use,” said Burry. “Big deal, I thought. I still draw like a four-year-old, and I hate art.” To silence his wife, however, he agreed to have their son tested. “It would just prove he’s a smart kid, an ‘absentminded genius.’”

Instead, the tests administered by a child psychologist proved that their child had Asperger’s syndrome. A classic case, she said, and recommended that he be pulled from the mainstream and sent to a special school. And Dr. Michael Burry was dumbstruck: he recalled Asperger’s from med school, but vaguely. His wife now handed him the stack of books she had accumulated on autism and related disorders. On top were The Complete Guide to Asperger’s Syndrome, by a clinical psychologist named Tony Attwood, and Attwood’s Asperger’s Syndrome: A Guide for Parents and Professionals.

“Marked impairment in the use of multiple non-verbal behaviors such as eye-to-eye gaze … ” Check. “Failure to develop peer relationships … ” Check. “A lack of spontaneous seeking to share enjoyment, interests, or achievements with other people … ” Check. “Difficulty reading the social/emotional messages in someone’s eyes … ” Check. “A faulty emotion regulation or control mechanism for expressing anger … ” Check. “One of the reasons why computers are so appealing is not only that you do not have to talk or socialize with them, but that they are logical, consistent and not prone to moods. Thus they are an ideal interest for the person with Asperger’s Syndrome … ” Check. “Many people have a hobby.… The difference between the normal range and the eccentricity observed in Asperger’s Syndrome is that these pursuits are often solitary, idiosyncratic and dominate the person’s time and conversation.” Check … Check …Check.

After a few pages, Michael Burry realized that he was no longer reading about his son but about himself. “How many people can pick up a book and find an instruction manual for their life?” he said. “I hated reading a book telling me who I was. I thought I was different, but this was saying I was the same as other people. My wife and I were a typical Asperger’s couple, and we had an Asperger’s son.” His glass eye no longer explained anything; the wonder is that it ever had. How did a glass eye explain, in a competitive swimmer, a pathological fear of deep water—the terror of not knowing what lurked beneath him? How did it explain a childhood passion for washing money? He’d take dollar bills and wash them, dry them off with a towel, press them between the pages of books, and then stack books on top of those books—all so he might have money that looked “new.” “All of a sudden I’ve become this caricature,” said Burry. “I’ve always been able to study up on something and ace something really fast. I thought it was all something special about me. Now it’s like ‘Oh, a lot of Asperger’s people can do that.’ Now I was explained by a disorder.”

He resisted the news. He had a gift for finding and analyzing information on the subjects that interested him intensely. He always had been intensely interested in himself. Now, at the age of 35, he’d been handed this new piece of information about himself—and his first reaction to it was to wish he hadn’t been given it. “My first thought was that a lot of people must have this and don’t know it,” he said. “And I wondered, Is this really a good thing for me to know at this point? Why is it good for me to know this about myself?”

He went and found his own psychologist to help him sort out the effect of his syndrome on his wife and children. His work life, however, remained uninformed by the new information. He didn’t alter the way he made investment decisions, for instance, or the way he communicated with his investors. He didn’t let his investors know of his disorder. “I didn’t feel it was a material fact that had to be disclosed,” he said. “It wasn’t a change. I wasn’t diagnosed with something new. It’s something I’d always had.” On the other hand, it explained an awful lot about what he did for a living, and how he did it: his obsessive acquisition of hard facts, his insistence on logic, his ability to plow quickly through reams of tedious financial statements. People with Asperger’s couldn’t control what they were interested in. It was a stroke of luck that his special interest was financial markets and not, say, collecting lawn-mower catalogues. When he thought of it that way, he realized that complex modern financial markets were as good as designed to reward a person with Asperger’s who took an interest in them. “Only someone who has Asperger’s would read a subprime-mortgage-bond prospectus,” he said.