« The Letters
Yet another beautiful model with the geek glasses »

Criticism and questioning are part of your job description, Mrs Collins. Get over it.

Apropos my post ‘With respect, Mr Key, you misjudge me.‘ I had a trifling interaction with another government politician under siege this week. 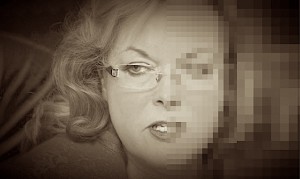 I’ve been researching an article about Justice minister Judith Collins — specifically the criticisms of her handling of the David Bain compensation issue. (You may recall my sense of genuine regret and disappointment in her over her reprehensible treatment of Justice Binnie and his report. See: Current affairs through partisan filters. David Bain in limbo.)

Anyway, as part of my research this week, I came across a strident, harshly critical article about the issue — critical of Mrs Collins — on a blog called ‘Lauda Finem’.

I read the piece (here if you’re interested) and was struck by a note in the manner of a disclaimer at the foot of the article, which I thought nicely stated the position I have struggled to communicate to a commenter here who repeatedly (and vacuously) called me a ‘Labour shill’.

Disclaimer: Lauda Finem hold no views whatsoever on the innocence or guilt of David Bain, nor do we, in pointing out this government’s corrupt behaviour, endorse any opposition party. Our position has only ever been concerned with corruption, bent pollies, political interference, the principles of fair play, natural justice and the rule of law; which Judith Collins seems to think she’s above. [emphasis added]

You can draw your own conclusions about the partisan or otherwise nature of the writers at Lauda Finem — just as readers are entitled to do about me. But, as I ask you to do, I take them at their word.

Impressed with the clarity of their statement, I tweeted it:

and cited the source (as you do) … which got a reaction of sorts, as you can see: 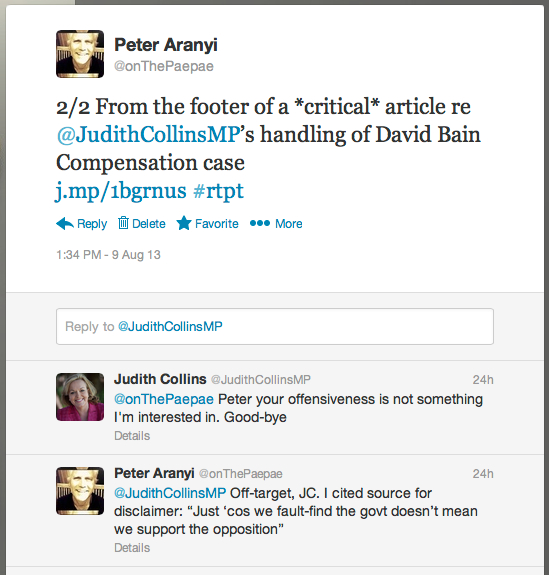 Mrs Collins’s tetchy response (a far cry from this) reminded me of a memorable line from TV’s Absolutely Fabulous where the wonderful Patsy (Joanna Lumley) responded to someone with an imperious, “Don’t question me!” 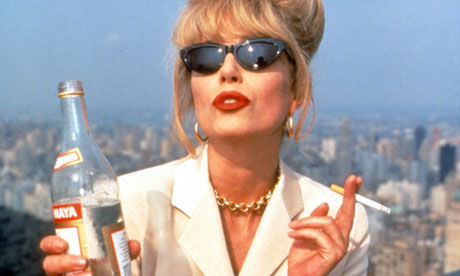 One of my Twitter followers Andrew Mitchell gave me a chance to explain my map of the world on such interchanges with the power elite: 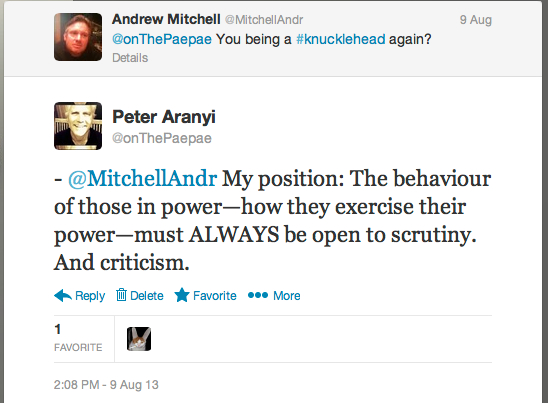 See, here’s the thing: I have little interest in the machinations of the Opposition parties, especially any ‘leadership rumblings’, except how they might be being used by spin doctors and dissemblers, (unless they’re really breaking new ground). Likewise polls.

It’s the government of the day, and its MPs who have their sweaty hands on the levers of power, who attract my attention. At this point, that’s Mr Key, Mr Joyce, Mrs Collins and their colleagues.

My criticism of Mr Key’s GCSB Bill, his SkyCity ‘tender’ process,  and Mrs Collins’ various actions — including her treatment of Justice Binnie and David Bain’s supporters, and her eyebrow raising (ha!) deployment of government appointment processes — have nothing to do with being ‘partisan’ or ‘politically-aligned’.

It’s the government’s job to face public and media criticism, to be questioned. That’s our system. Ministers are required to have light shone on their decisions, and the manner in which they make them.

Sometimes that might feel ‘offensive’. Yeah, well, OK. You get that.