« Is Steve Goodey confused … or rewriting history?
Thinking can be overrated » 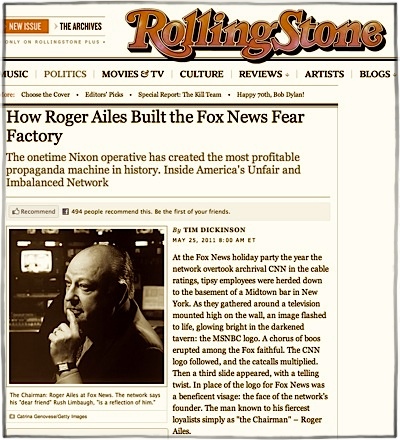 Tim Dickinson in ROLLING STONE: 'Ailes was also determined not to let the professional ethics of journalism get in the way of his political agenda...'

The next issue (June 2011) of Rolling Stone features an extensive profile of Fox News supremo Roger Ailes. The guy fascinates me — well, better said, his tactics do — it’s really good to read some hard-out comments about the lack of veracity but enormous influence of Fox News and their propaganda machine.

It’s like a study in very deliberate, stage-managed deception. This line says a lot …

It was while working for Nixon that Ailes first experimented with blurring the distinction between journalism and politics, developing a knack for manipulating political imagery that would find its ultimate expression in Fox News.

And on one of my key themes, authenticity versus manufactured credibility …

Ailes has used Fox News to pioneer a new form of political campaign – one that enables the GOP to bypass skeptical reporters and wage an around-the-clock, partisan assault on public opinion. The network, at its core, is a giant soundstage created to mimic the look and feel of a news operation, cleverly camouflaging political propaganda as independent journalism.

To watch even a day of Fox News – the anger, the bombast, the virulent paranoid streak, the unending appeals to white resentment, the reporting that’s held to the same standard of evidence as a late- October attack ad – is to see a refraction of its founder, one of the most skilled and fearsome operatives in the history of the Republican Party.

As a political consultant, Ailes repackaged Richard Nixon for television in 1968, papered over Ronald Reagan’s budding Alzheimer’s in 1984, shamelessly stoked racial fears to elect George H.W. Bush in 1988, and waged a secret campaign on behalf of Big Tobacco to derail health care reform in 1993. ‘He was the premier guy in the business,’ says former Reagan campaign manager Ed Rollins. ‘He was our Michelangelo.’