You don’t have to make stuff up.

In a nice bit of straight journalism (yes, there is such a thing!) CNN’s Anderson Cooper in his ‘Keeping Them Honest’ slot this week debunked a nasty piece of work by Congresswoman Michele Bachmann, who, as he put it “used up our air time last night, rather than answering questions about Medicare…and she chose to spread a story which is blatantly false.”

Watch how the false story about the supposedly enormous price tag for President Obama’s ten-day tour of Asia, was parroted — even exaggerated — by liars like Glenn Beck. (Take a look and ask yourself if I’m being a bit harsh. I don’t think so.) 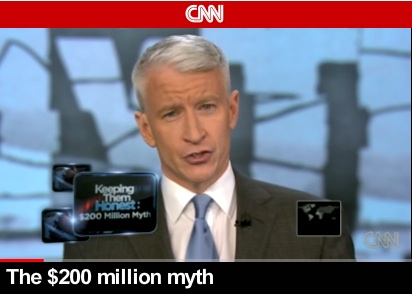 Video below the fold.