« Good on the NZ Herald for this
Our heroes are personal »

tl;dr … and an old joke from Cactus Kate 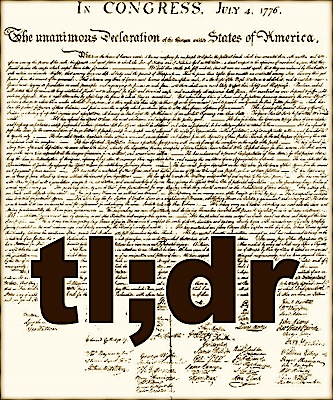 If you don’t already know, this pithy abbreviation tl;dr means ‘too long; didn’t read’. It’s sometimes used as a bitchy little put-down of someone else’s writing.

TLDR may not be a new issue for lawyers in offering written advice. But it is a growing one. Our clients are asking us to effectively “tweet” advice because they believe that is all that they need or can tolerate. I believe that I write clearly and concisely. I look for ways to shorten my words, sentences and paragraphs. However, when I am advising on a complex issue, the nature of which I anticipate the client may not fully comprehend, I am wary of giving the “two-sentence answer” that is more often being asked of me.

Why? First, in arriving at my advice, I have to make assumptions based on how the issue was communicated and the facts presented. My two-sentence answer changes profoundly if my assumptions are incorrect, or the facts are incomplete or erroneous. If the client is not fully apprised of those limitations, risk of error arises. In effect, a two- sentence answer shifts both the responsibility for and the risk of outcome to the advisor, by means of the TLDR expedient.

Second, my advice is always contextual. It is about a specific set of circumstances at a specific moment in time. It is not a rule for general application. Stripping away the context, which is inevitable in the TLDR mode of communication, makes the advice more “rule-like” or universal in appearance, if not intent. If so understood, the risk of misapplication of that advice increases substantially.

Third, my clients don’t want me around all the time. I understand that. But the compressed advice actually makes the clients’ continued need for my services even greater. …

But here’s tech writer Andy Ihnatko’s ‘translation’, which, for me, seems much closer to the mark.

Hm. From context, “tl;dr” seems to mean “I’ve the attention span of a tennis ball and I hate real discussion” but that’s too many letters.

One of the first responses to Andy’s tweet was:

@ihnatko @onlyanumber halfway through that tweeti gave up and started thinking about boobs.

… at which I chuckled in recognition because blogger/lawyer Cathy Odgers tossed a very similar joke my way in response to a post I wrote: Cactus Kate: ACT Hollow Man or Black Widow?

Easiest way to prove I do think like a man….I drifted in and out of consciousness thinking about rooting no less than 6 times through that piece.