« Speak up (or shut up) to defend a friend?
Cyber-bullying — and an aftermath »

A three horse race to rule over the global distribution of digital content … Apple in front by a nose. 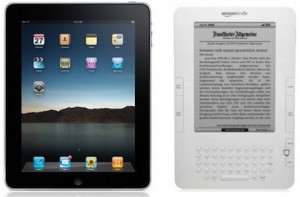 Worthwhile evaluation from someone who knows the publishing game better than most — and from more angles.

When Apple launched its long-rumoured iPad tablet computer late last month, it fired a major salvo in the battle for control of media in a new digital era. In its global sights were Google and Amazon who, along with Apple, are the companies driving this seismic shift in media.

All three companies are jockeying to be gatekeepers between content providers and consumers. So far, many of these battles have been playing out overseas but in 2010, New Zealanders will get to join in.

It’s the ability to get consumers to pay for digital content and reduce its reliance on a broken online advertising model that is at the heart of the media’s excitement. So it’s not surprising that a lot of the early jostling is for control of the one major medium that’s largely ad-free, books.

With business models that link online stores to specialised gadgets, companies like Apple and Amazon are proving that consumers will pay for music downloads, ebooks and even online newspaper subscriptions if you make it easy and attractive enough.

An interesting, but little-noticed part of Apple’s announcement is likely to make Amazon’s job even tougher. Apple, like Google, is throwing its weight behind an industry-sponsored open ebook format called ePub. This might finally end the ebook ‘format wars’, tipping the balance in favour of a single format, ePub, and forcing Amazon to rethink its own proprietary Kindle format. Losing control of both the device and the format will make it tougher for Amazon to control the distribution of digital content. There are signs its market control is already weakening.

Other companies are in the picture, including Microsoft, and it’s too early to rule out a dark horse emerging. But so far, it’s looking like a three horse race to rule over the global distribution of digital content. Following Apple’s latest move, I’d say it’s Apple in front by a nose.

I agree with Martin re the future of the books ‘marketplace’. And newspapers? For me, this is the image that resonated as a glimpse of the (near) future: 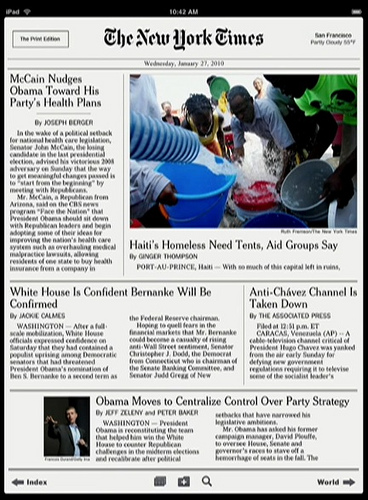