« Things that aren’t supposed to be said
Caption competition: Obama in Ireland »

They’re playing our song (or whistle-blowing it?)

I don’t know if you’ve heard about Frank Bailey — he’s a former Sarah Palin aide who has written a ‘tell-all’ memoir of his time working for the high-profile former Governor and vice presidential candidate. 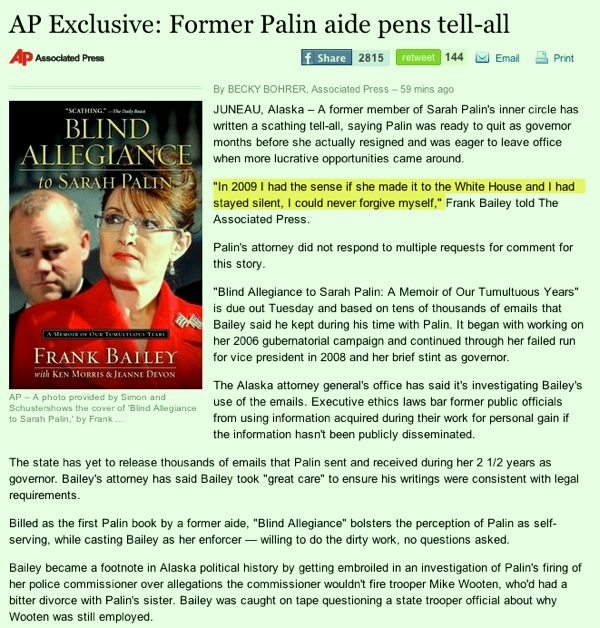 This Associated Press report about an upcoming Sarah Palin book has gone viral. Click to enlarge.

Frank Bailey says he’s not bitter or being vindictive. He says writing the book Blind Allegiance to Sarah Palin: A Memoir of Our Tumultuous Years was ‘cathartic’ — and it was motivated by a concern for the truth about Palin the self-serving political operator and the possible consequences of NOT speaking out.

One comment in ‘enforcer’ Bailey’s pre-launch publicity interview with AP jumped out at me, given an on-going theme of this blog: The encouragement we try to give to blow the whistle about wrongdoing when you see it. It’s this:

“In 2009 I had the sense if she made it to the White House and I had stayed silent, I could never forgive myself,” Frank Bailey told The Associated Press.

Yeah. That’s how it is y’all. You either have a proclivity to tell the sometimes inconvenient truth, or to keep it buried. I see it as like a litmus test: acid or alkaline. 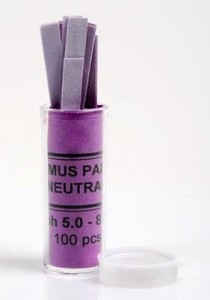 I’m not saying people can’t change, but justifying one’s silence in the face of what you see as lies, untrue claims (or other wrongdoing) is, it seems to me, a sign of your character much more potent than any personality test. Silence is consent, as we discussed in relation to Paul Haggis and the Church of Scientology.

Giving rat-bags your co-operation by helping them cover-up, effectively becoming a co-conspirator is aiding and abetting their ‘crime’. Helping them get away with victimising others, well, that’s even worse. I’ve recently discussed a case of that elsewhere.

There are plenty of examples you will never know of people who have compromised and kept silent about untrue claims or corrupt actions. There are plenty of fine-sounding, upright-appearing but deceitful people [collaborators, by another name] who have co-operated with what you and I (and they) might call ‘wickedness’ — for all sorts of reasons. You may never know, but they know. And they know somebody else does. They have to live with that leak in their integrity — that’s what Frank Bailey is referring to.

Out of interest, look how widespread the reporting of Frank Bailey’s ‘had I stayed silent, I could never forgive myself’ phrase is. Wow. (I think there’s a certain ex-Governor who will be doing some non-forgiving of Frank Bailey too. You betcha!)