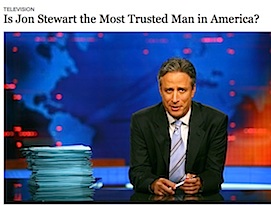 The canonization (OK, not really. He’s not dead!) of Jon Stewart — America’s most trusted newscaster — continues.

I rate Stewart very highly indeed, which should go without saying, but hey, let me say it.

His recent whack at Pres. Barack Obama’s underwhelming primetime televised oval office speech about the Gulf of Mexico oil spill sparked an interesting appraisal (well, I thought so) of Stewart as a ‘true satirist’ defined as …

A true satirist, and a true patriot, takes no prisoners; he stands for certain values and judges others not by whether they agree with him point-for-point, but whether they can go toe-to-toe with the satirist in terms of consistency and honour.

That definition is a little fraught, if you ask me — but, on reflection, I agree with it as an approach to commentary here at www.ThePaepae.com …

I do look for ‘consistency and honour’ — and aim for it. My words may be harsh, but not, I think, unfair. (And I don’t regard nor promote myself as perfect or a ‘saint’, nor, despite the protestations, do I set out to engage in ‘competitor-bashing’. But I digress … )

Matt Zoller Seitz’s full article at Salon.com ‘Jon Stewart was born to bash Obama —
How attacking the president has turned the liberal “Daily Show” host into a true satirist‘ is worth a read if you follow Stewart, as I do.

It also has a link to a video of that episode of The Daily Show which is well worth watching.