Staying positive with your team 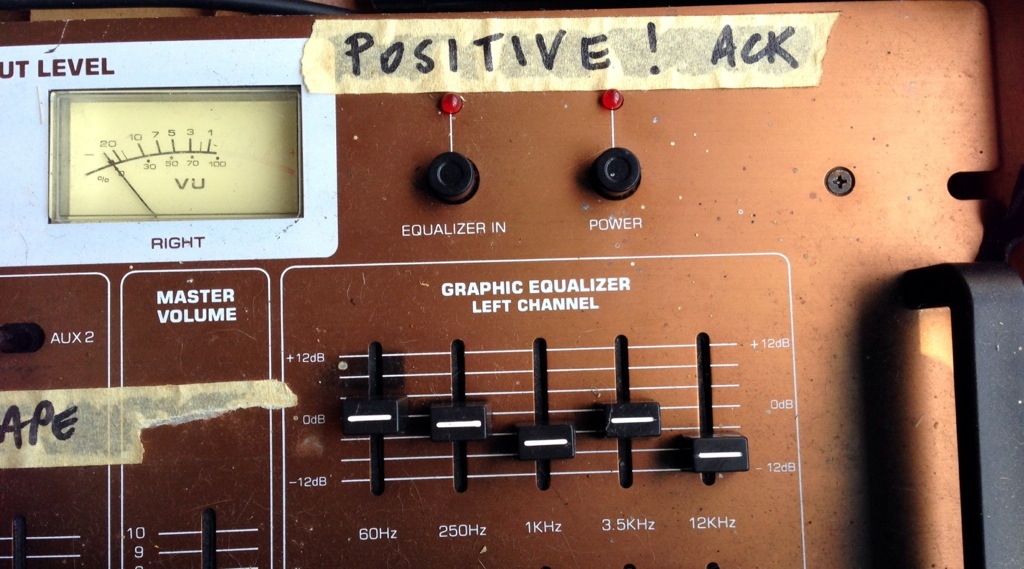 Be careful about WHEN you load up your teammates with ‘feedback’ or correction. Choose a useful time.

In the offline (i.e. real) world, one of my businesses is a training company.

Over the years, I’ve had the privilege of working with some amazing presenters and speakers. Not the least of those is my founding partner who is, in my view, one of the most inspirational facilitators I have ever seen in action. Her ability to build rapport with a group of people is breathtaking. She is very, very good.

Yesterday I was poking around in our storeroom looking for something, and I came across an old sound control board I used for our seminars years ago. There, prominently stuck on the board on a tatty piece of masking tape, was an important prompt I’d written for myself:

… which was my reminder, that when the facilitator or trainer came to the back of the room (usually having set the participants to work on an activity, or at a session break) that I should ONLY speak positively to them;  that I should acknowledge what was working; and focus feedback (at that time) on what was going well.

I learned over hundreds of hours as a programme director that it’s almost always best to assume your speaker simply cannot absorb correction or criticism while they’re ‘performing’. Unless it’s a safety issue, you are far better to leave any ‘negative’ feedback for a debrief — later. Even the best-intentioned criticism can knock the wind out of their sails, reducing the confidence so crucial to their performance leading a group.

Public speakers (and I’m the same when it’s my turn) can at times develop a kind of ‘stage blindness’ where they simply don’t absorb things around them not related to the task at hand. Time frequently telescopes — who hasn’t had the experience of running out of time when speaking? Or missing out big chunks of what we meant to say? In our teams, we support our speakers with a series of Time Signs counting them down to the planned session break, and having someone whose job it is to watch the presenter at all times to respond to their needs.

So, what I learned was: DO NOT try to load them up with ‘corrections’ or negative feedback mid-flight. It just doesn’t help.

Be positive. Acknowledge what’s working. Be relentlessly encouraging. Leave any what-you-are-doing-wrong-and-how-you-could-do-it-better feedback (there’s always something that can be improved, right?) until later. That way — and if you do it right — you’ll find you’re actually empowering them to do better.

Guess what? This works. It’s called Timing — an approach worth remembering when working with any team.

It was nice to be reminded of when and how I worked that out.