« Heads must roll: Minister for Marmite
Bryan Gould’s must-read on the changing face of John Key »

Simon Power is putting it all behind him. Whaaat?

This caught my eye in today’s NZ Herald piece Govt turns its back on terror law about the woeful state (sarcasm) of our country’s botched me-too Terrorism Suppression Act. 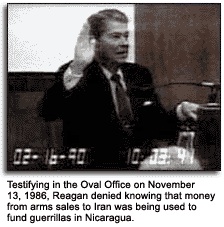 [Former justice minister] Mr Power, now a banker, said yesterday he could not recall why he allowed the review of the act to be dropped. He had made a decision when he left politics last November not to comment about events that occurred while he was in Government.

The most significant ‘I can’t recall’ why I acted/didn’t act as I did was in my view Ronald Reagan on the Iran-Contra scandal. A ‘patriot’ by the name of Oliver North working for Reagan secretly arranged illegal US arms sales (i.e. in defiance of an arms embargo) to ‘sworn enemy’ Iran — now being described by hawks in the US as ‘America’s Number One Enemy’ — then funneled funds to Contra rebels in Nicaragua to oppose the ‘Marxist’ Sandanista regime.

He was probably in the early stages of Alzheimer’s disease.