Setting the news agenda … without news 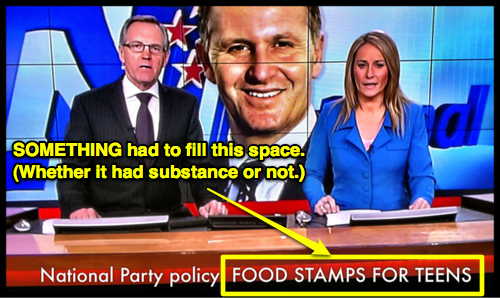 TVNZ news 'leads the news' with this non-news. But what was their choice? (All words added.)

It’s a bit like that with news organisations and the set-piece that is a political party conference. I’ve covered enough of these as a reporter to recognise the soporific nature of last weekend’s National Party conference from a thousand paces.

Let me offer this ‘umble revision of the ‘bank statement’: If you’re a journalist covering a political party conference and there’s no blood-letting, leadership spill, scandal or other ‘fireworks’ — and no meaningful policy announcement, you’ve got a problem.

The problem? Your masters will have reserved ‘space’ in the bulletin/paper/medium for ‘Rumplestiltskin reports from the conference’-type coverage, whether there’s actually any ‘news’ or not. You/they’ve got to fill that reserved space with something.

So, in this case, National’s (let’s face it) pretty vacuous-but-sends-the-right-signals-to-National-supporters spin FILLED the news for a while. (“You can fool some of the people all of the time … etc.”)

Later, when the competitive jungle fever has worn off, the media indulges in analysis and a rendering down of the so-called ‘policy’ (ahem) like this — NZ Herald Editorial: Job creation lacking in PM’s policy. (An article worth a read if you care, whether or not you agree with all of it.)

But, of course, elections aren’t won or lost relying on the views and opinions of those who read newspaper editorials. The mass-media/first impression coverage (‘the sugar rush’, I call it) is often all that matters. Hello? That’s what the spin doctors count on — and all too often they get it.

As my old workmate John Pagani, commenting on the NZ Herald‘s editorial, said rather well, I thought:

The remarkable thing about that announcement on the weekend was the cynicism of the misdirection – it had nothing at all for jobs, despite a youth unemployment crisis. You can tell strategists spent weeks sitting around trying to find something that would fit the polling demand to ‘crack down on welfare’ without actually trying anything. Ups to them – they did come up with something that fits the all shine, no substance parameter perfectly.