« Been on holiday
Wailing about death threats, forgetting what they’ve written themselves »

Quick and easy reach for allegations of mental illness 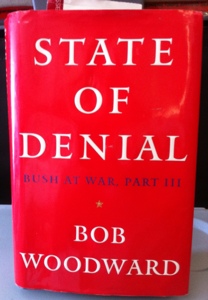 I read (devoured) Bob Woodward’s State of Denial — Bush at War, Part III while on holiday last week. I spotted the book on a shelf, plucked it down and thought, This may interest me. Boy, did I misunderestimate. It’s a really great read.

The agenda to invade Iraq, as Woodward explained earlier in Plan of Attack and the cynical use of a surge in public support (90% approval rating!!) following 9/11 to justify it is laid out in detail. The phantom WMD deceit is spelled out, coldly recording the Pentagon & White House sexing up the intelligence claims, plus the hopeless bureaucratic infighting and ‘not my problem’ attitude those (General Spider Marks) tasked with ‘finding and capturing’ WMD faced and otherwise well performing operators like CIA head George Tenet failing to speak up at crucial junctures.

The George W Bush administration was determined to go to war against Saddam’s Iraq, and history records how corruptly it did so, and also the failure and entanglement and cost of the campaign.

Having myself just welcomed back home safe a couple of young loved ones who’d completed dangerous military service tours of Afghanistan, I read the book with a sober recognition that these men in their fifties, Bush & Cheney, and sixty-eight (Rumsfield) were wagering with lives half their age, and less. I heard an Australian casino ad while I was away: “Bet with your head, not over it.” Ha! So insincere! And so, I came away thinking, were these neocons. Too bad.

Woodward has written a grim book but not a depressing one. Along the way, he records this famous bite back against criticism in the vein of Oscar Wilde’s ‘all one’s opponents are insane’ motif:

Though technically outside the governent since 1999, former House Speaker Newt Gingrich threw himself in to the mix, publicly blaming the the State Department for the failed diplomacy and for the idealogocal warfare within the administration. “The State Department is back at work pursuing policies that will clearly throw away all of the fruits of hard-won victory,” he said on April 24 in a speech at the American Enterprise Institute.
Armitage responded for Powell: “It’s clear that Mr Gingrich is off his meds and out of therapy.”
— State of Denial chap 18 p 179

Question his sanity and you don’t have to respond to the content of his criticism. I see that reaction all the time from the intellectually lazy or weak not too far from here.