« Priorities
Images of death in the street »

Put yourself in her shoes 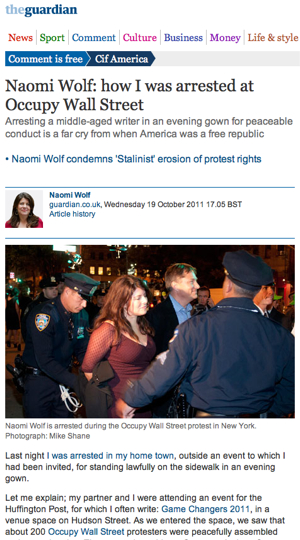 This is worth reading … Naomi Wolf: how I was arrested at Occupy Wall Street. It demonstrates something I’ve seen — police becoming fixated with ‘keeping order’, and applying strong-arm tactics to people who are not their normal clientele, and will inevitably apply ‘scrutiny’ to their civil-rights-cramping actions.

I’ve been caught by this myself, and from experience, it’s instructive all round. The police learn they can’t just push everyone around like the battered souls they encounter every day. Sickly white liberals (like me) work out they’re bloody lucky not to be police officers themselves, and to have people willing to do the dirty work … and that sometimes the saying ‘You can’t make an omelette without breaking a few eggs’ has wider applications.

When we brush up against police restricting our civil rights, we tend to bristle, and challenge it. But sometimes the machine is bigger than us and we get caught up in the flywheel … unaccustomed to the routine trampling of our dignity which can be the norm for people repeatedly dealing with the police. (Because they’re crims.)

Ms Wolf’s story also shows the give-an-inch-take-a-mile latitude that makes me reluctant to extend police/security powers. Sometimes, as we’ve seen recently here in NZ, the ‘but they’re real bad buggers’ justification is trotted out to boost powers (covert video surveillance in the latest instance, firearms, tasers) … but then the powers are deployed inappropriately, unguardedly, against people who aren’t terrorists, gang members or P-smugglers … like, say, left wing or religious-based social activists.

We put more tools at the disposal of the state/security apparatus … but who watches the watchers? Not everyone whose rights are abused turns out to be a writer for the New York Times.