« Of goose and ganders. ACT on Campus referred to police for breaching the law
NOT taking their own ‘advice’ … for better outcomes » 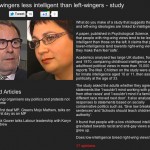 Here’s a link to the original ‘Daily Mail’ story for more detail. (If you care.) It includes this …

Individuals with lower cognitive abilities may gravitate towards more socially conservative right-wing ideologies that maintain the status quo. …
The authors claim that there is a strong correlation between low intelligence both as a child and an adult, and right-wing politics.
… ‘Conservative ideology represents a critical pathway through which childhood intelligence predicts racism in adulthood,’ says the paper.
‘In psychological terms, the relation between intelligence and prejudice may stem from the propensity of individuals with lower cognitive ability to endorse more right wing conservative ideologies because such ideologies offer a psychological sense of stability and order.’

Somebody’s having a laugh. But what if it’s true?