« iPhone ‘finder’ – a real sweet guy according to his attorney
A glimpse of the future? » 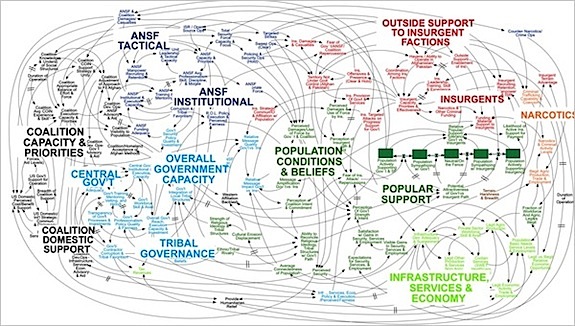 Bloat is as bloat does. How dense is too dense? Well THIS is. (Click for larger image via MSNBC & NYTimes.com)

I’m not a big fan of overcomplicated, dense Powerpoint ‘presentations’. I’ve seen them used as a crutch and overladen with bullet points and too much type. Looks like other people have reached the same conclusion…

Like an insurgency, PowerPoint has crept into the daily lives of military commanders and reached the level of near obsession. The amount of time expended on PowerPoint, the Microsoft presentation program of computer-generated charts, graphs and bullet points, has made it a running joke in the Pentagon and in Iraq and Afghanistan.

“PowerPoint makes us stupid,” Gen. James N. Mattis of the Marine Corps, the Joint Forces commander, said this month at a military conference in North Carolina. (He spoke without PowerPoint.) Brig. Gen. H. R. McMaster, who banned PowerPoint presentations when he led the successful effort to secure the northern Iraqi city of Tal Afar in 2005, followed up at the same conference by likening PowerPoint to an internal threat.

From a New York Times article We Have Met the Enemy and He Is PowerPoint about how the US military (and I am sure they are not alone) expends more time loading more data into Powerpoint … than it usefully should.