« When the rules change, everyone goes back to the start
Ooh, err… »

On the giving end…

Tom Scott nails it on the relationship between the Reserve Bank Governor and the Government of the Day.

On the receiving end ... pressure is mounting on Mr Popularity to pay the price of his coalition … 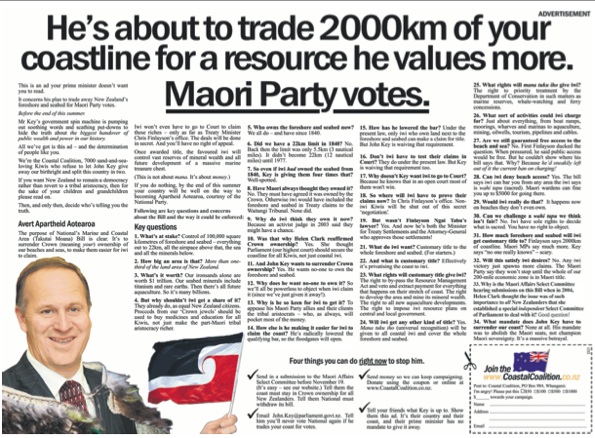 Or has he been writing cheques the National-led coalition government can’t cash?

The campaign against the legislation has certainly taken a personal, anti-John Key turn. e.g. ‘Four things you can do to stop him’, ‘Tell your friends what Key is up to’ ‘Three steps you can take to help stop John Key privatising our coastline’ etc.

Ask yourself: Is this government policy or not? Of course it is. Has cabinet approved the draft legislation? Of course. Therefore, isn’t the headline “He’s[i.e. John Key’s] about to trade …” misleading from the start? Er…

I find it interesting to see the (throughly fair-minded, I’m sure) graphics people at the Coastal Coalition choose to dress Prime Minister John Key in a chiefly korowai (feather cloak) and waving the Tino rangatiratanga flag commonly associated with Maori independence.

I don’t suppose they mean it as a compliment. They seek to denigrate him with these symbols. And they seek to appeal to an anti-Maori sentiment … and distrust.

It’s revealing that they must think that’s their most effective angle of attack.
It says a lot, doesn’t it? About the ‘Coastal Coalition’ and their picture of us.