« A trolling we will go … anonymously
More inconvenient juxtaposition »

Former editors of the News of the World. 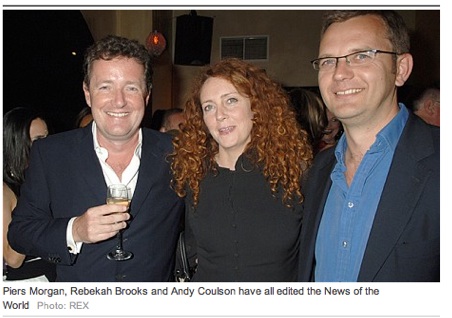 Personally I see Morgan’s June 2009 comments on the BBC’s Desert Island Discs as well short of a smoking gun, as does Jeff Bercovici: ‘That Piers Morgan Smoking Gun? Not So Smoky’.

Read Morgan’s ‘admissions’ yourself and see what you think.

Kirty Young BBC: What about this nice middle-class boy, who would have to be dealing with, I mean essentially people who rake through bins for a living, people who tap people’s phones, people who take secret photographs, who do all that nasty down-in-the-gutter stuff. How did you feel about that?

Piers Morgan: To be honest, let’s put that in perspective as well. Not a lot of that went on. A lot of it was done by third parties rather than the staff themselves. That’s not to defend it, because obviously you were running the results of their work. I’m quite happy to be parked in the corner of tabloid beast and to have to sit here defending all these things I used to get up to, and I make no pretence about the stuff we used to do. I simply say the net of people doing it was very wide, and certainly encompassed the high and the low end of the supposed newspaper market.

The way I see it, we each develop the inescapable reputation and associations our actions attract or develop. Morgan can’t change the facts that he was at different times editor of two low-end, gutter-press, ‘tabloid beast’ rags … and he was, most likely, in the heat of competition adhering to the contingent moral code [cough] and culture.

But that clip doesn’t prove anything. Tempest in a tankard.
(It might shake something else out, though.)
-P