« Our American cousins and their approach to the English language
Greetings, gentle reader »

He wasn’t the first to say it, but he was the first I heard say it, and he said it with such passion.

Then Prime Minister1 Geoffrey Palmer, whose book Unbridled Power? was one of the texts I’d studied in politics at Victoria University, said, with feeling: 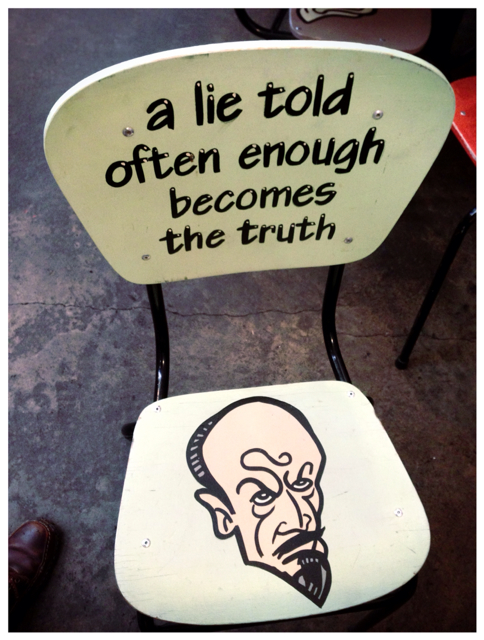 Visit the Chocolate Frog cafe in Miramar for this and other fine self-aware slogans. Then sit on them. Quote attributed to Vladimir Ilyich Lenin. (Pic by Peter Aranyi.)

He was, of course, quite correct.

The world of ‘spin‘, and ‘framing‘ and all the other Hollow Men-esque voodoo arts ‘activists’ like local yokel Matthew Hooton (and offshore, the mythical Crosby|Textor et al) connive to practice and promulgate on unsuspecting voters, and how various ‘perceptions’ are created, nurtured, then trafficked, can be fascinating to watch. If you’ve got a strong stomach.

I spotted this chair (‘A lie told often enough becomes the truth’) in the Chocolate Frog cafe in Wellington last week when my son and I met my beautiful (really) niece for a birthday morning tea. Obviously, it caught my eye. Hence the pic.

Given the frenzy of spin and propaganda swirling around the NZ Labour Party leadership ‘contest’ — especially that from people like Matthew who, really? Remind me why we’re asking him for a comment again? Exactly? — I had to chuckle.

Not that I’m remotely communist (‘not a communist bone in my body’ etc, etc) but another apposite Lenin quote, given NZ’s recent lurch towards a surveillance state (thanks to John Key’s GCSB Bill) is this over-the-top, revolutionary one:

“While the State exists, there can be no freedom.
When there is freedom there will be no State.” — Lenin

What does it even mean to say that in the 21st Century? Aren’t nation states here for good? A permanent feature?
Even Islamic states are states … mind you, they’re not demonstrating a lot of commitment to ‘individual freedom’, as I see it.