« An ‘abiding distrust’ for anonymous speech
Jon Stewart on Fox News – Is this Crossfire Part 2? »

“Look, Congressman, if you’re sending pictures of your penis as bait to young women who follow you on Twitter, then you’ve got to go.”

Yep. Bad judgement is bad. A cover up worse.

Twitter didn’t do in Weiner. Sex didn’t. The coverup did. Ever thus.

The medium is the message?

It’s hard to look past this from Jacob Wiesberg, perhaps responding to the meme that Anthony Weiner’s typo was responsible for his unfortunate exposure … 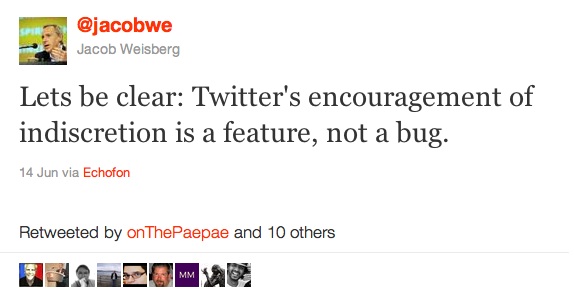 Another view of Pelosi’s involvement …
The Weiner Shot That Pushed Pelosi Over the Edge – The Atlanticwire’s John Hudson.