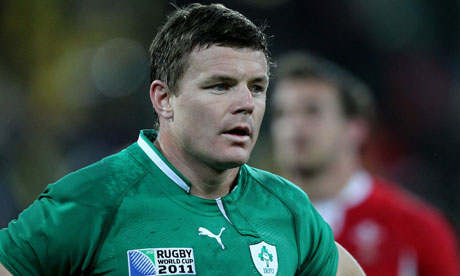 photo by Jason O'Brien/Action Images via The Guardian

Irish rugby captain Brian O’Driscoll is an impressive man, even in defeat. Here’s how he responded to losing to Wales in last night’s Rugby World Cup quarter final.

We failed to do ourselves justice. You have to earn everything you get in Test rugby and today we were off the pace – and we go home as a result of that. That’s the bitter disappointment of it, but you have to suck it up when you haven’t performed on the big stage.

It’s very disappointing collectively, while, personally, I won’t get this opportunity again. That really sucks, but life goes on. We had high hopes going into the game and we were in good form, but we were outplayed by Wales. At the business end of World Cups you cannot afford to be below par. We were and we paid the price. We gave ourselves an opportunity by winning our group and it is a tough one to negotiate.

No excuses, no belly-aching.
Good on him.

PS Good to see the French show up too, by golly. Farewell England