More evidence that Carrick Graham is a paid character assassin

Spotted in yesterday’s news: two references to dirty PR (or as he likes to put it: ‘below the line communications‘) work carried out by Carrick Graham and his most-likely-only-doing-it-for-the-money glove puppet Cameron Slater.

In a case that seems to have been judged (by, like, an actual Judge) as attempted character assassination, Carrick Graham appears to have been one of the assassins, once again in part by using Slater Jnr’s deceitful PR attack blog. 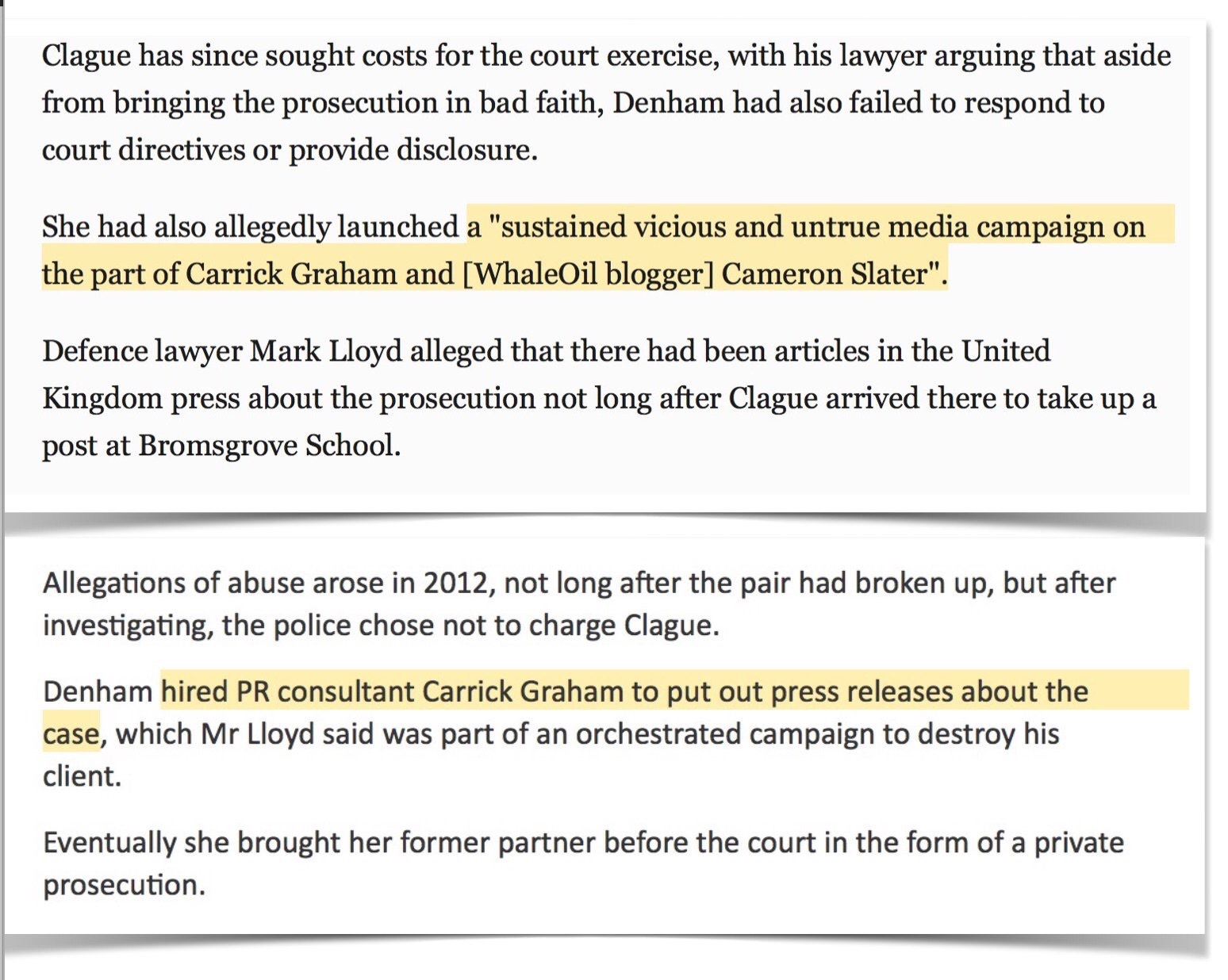 Personally, I’ve had all the evidence I need to form a negative view of Carrick Graham. Not that I expect that to bother him. The basis for some of my views can be found among these posts.

It seems to me that this Denham case can be seen as one more brick in the argument that Carrick Graham works as a professional smear artist using, among other things, Cameron Slater’s (yuck) slippery services to denigrate, demean and damage other people’s reputations. These mercenary, rubbery characters use ‘dirty PR’ tactics to attack others – as a business. We’ve seen that in Nicky Hager’s book Dirty Politics and elsewhere.

For instance, I’m reminded of the September 2014 story then Sunday Star Times business editor Tim Hunter recounted about how Carrick Graham tried to use a TV3 reporter to smear people involved in Allied Farmers through a proposed TV “documentary” – apparently on behalf of the sadly oh-so-misjudged Mark Hotchin.

This was, of course, the very same disgraced Hanover Finance director Mark Hotchin who, you will recall, the Chisholm inquiry showed had employed Carrick Graham, Cameron Slater and Cathy Odgers to (cough) “balance the media”. This saw a smear campaign launched against the heads of the Serious Fraud Office and the Financial Markets Authority – two enforcement agencies investigating Hotchin and Hanover at the time.

Hunter’s article was, typically in those days, one of the Fairfax business stories that bizarrely never made it into the news organisation’s online editions or an archive, but I scanned it: 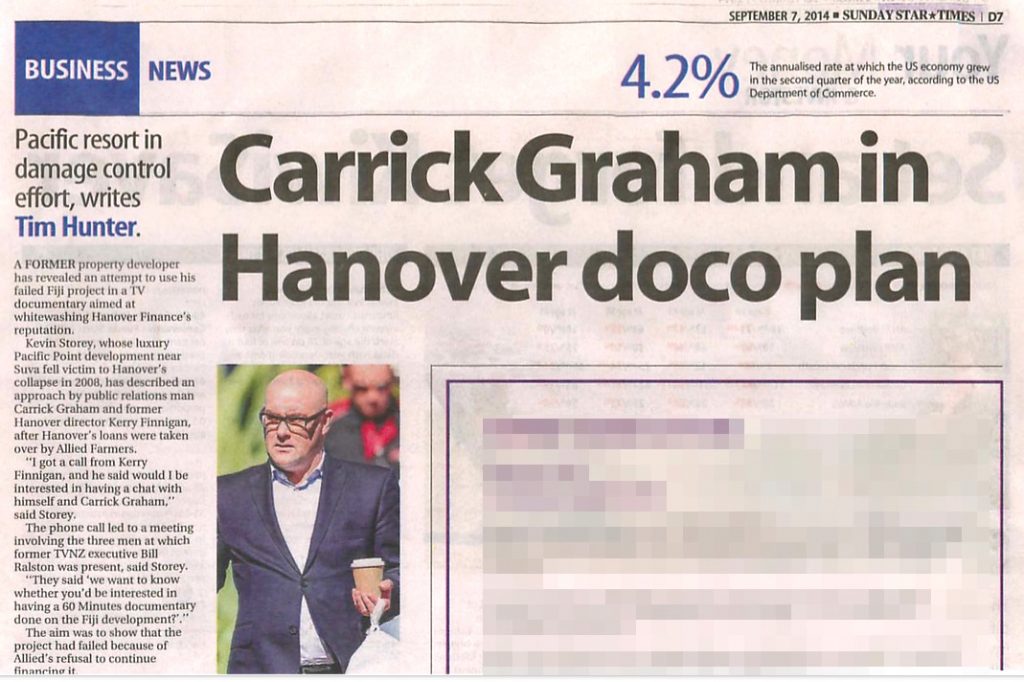 Storey said he played along with the idea and it led to a meeting to discuss a programme with Graham and then-TV3 reporter Tony Reid. When it was clear the proposal was aimed at casting Allied as the villain, Storey said he backed out. “I said Allied took it off Hanover. It was Hanover that defaulted.” (emphasis added)

It seems to me, that line: “aimed at casting Allied as the villain” — that’s Carrick Graham’s professional modus operandi right there. That’s what he does. Distortion. Mercenary, weaponized fact twisting. He may see some dry flakes of satisfaction in that career choice. I see none.

Bill Ralston’s involvement was interesting to note too. So – he was part of the pitch for the proposed  60 minutes “documentary”. Hmm.  Also:  Hunter says it was Ralston who introduced/recommended Carrick Graham’s (cough) services to Hotchin. Well, who would have thought it?

I personally hope the defamation case being undertaken by the three public health professionals who’ve been relentlessly, viciously and personally targeted by Carrick Graham and Slater Jnr (see Apparently this choir boy and his glove puppet are being sued for defamation) works its way through the courts with the same outcomes as this ex-Kristin principal case: exposing this shabby ‘dirty PR’ stuff Carrick Graham does for the deeply cynical, deceitful crap it is. And hopefully with a financial penalty.

Update: Wow, this extract from the decision pulls no punches, does it?: