« Playing with numbers
The overblown role of religion in conflict » 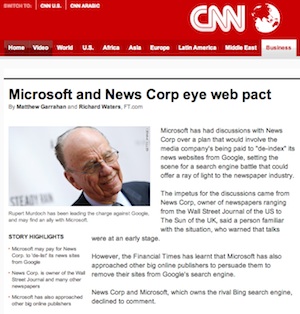 Wow. Can this be the future?

Microsoft paying News sites to BLOCK their content from Google? (… while, presumably, allowing it to show up on MS Bing)?

OK, it’s still just a rumour.
Here’s the CNN story and this quote from Lance Ulanoff in PC Mag‘s “online news ice age” what-are-they-thinking?’ reaction — which resonates with me.

Could Microsoft really be this tone deaf? I have nothing against some hard-nosed competition, but Microsoft could be setting in motion the biggest online information chill in history. If the folks at Microsoft stopped to think—even for a moment—they’d have to realize that they’ve got their own hand too close to the lion’s mouth. Sure, right now they’re feeding it a big, juicy piece of meat (the ability to get off of Google’s index), but how soon before the lion snaps that hand right off? Seriously, how long before News Corp. says, “Yeah, you helped us, but we’ve been thinking about it, and not only do we not want our content on your index, but we don’t want to see you serving any sites that rewrite or offer synopses of our content/reporting.” Where would that leave Microsoft Bing?

There’s no question that the content of news sites is expensive to produce (consider the cost of the various correspondents, for instance) and it is harvested mercilessly in a parasitic way by websites all over the world (including this one, ahem).

Like it or not, Murdoch’s description of Google ‘stealing’ from him bears more than a passing resemblance to the truth, despite the rising howls of say-it-ain’t-so from ‘new media’.

My first reaction as a publisher is: Jeez, if Google/Huffington Post/Arts&Letters Daily/Beatties Book blog/Salon/your-favorite-aggregator-here is getting a commercial benefit while freeloading on the NY Times, WSJ etc … why not? [Yes, I know there’s a ‘no-one-would-find-their-way-to-the-WSJ’s-stories-if-they-weren’t-sent-to-them-by-the-aggregators’ school of thought. But I’m not convinced of that.]

If MS is willing to PAY Mr Murdoch for a ‘competitive advantage’, or [more likely, as with the me-too move Google took to match Bing’s indexing of Twitter content] to provoke/force Google into a more business-like arrangement with the content originators — or copyright holders, if you get my point — I say fair enough.

Google is a big phat target … and has grown that way, no argument, by producing wildly useful stuff and placing itself at the infrastructure of e-commerce/online life — but let’s acknowledge that a big part of that empire is links to and content from other people’s intellectual property. That’s called publishing all day long in these parts — interwebs or no interwebs — and there are some conventions about rewarding the ‘content providers’ or ‘copyright holders’.

Further, I’m often struck by the arrogant discourtesy (in my opinion) some online ‘personalties’ display towards what they sneeringly call ‘mainstream media’ (MSM) or ‘old media’ while at the same time swimming in the pool expensively-provided by the traditional news organisations, drinking at their fountain, dressing in their clothes and peeing on their garden.

These parasites (is there a better word?) sometimes appear to display no concept of journalistic training or the legal obligations/constraints on the fourth estate. They fart and belch their ‘opinions’, ‘exposes’, ‘exclusives’ and ill-informed rants … frequently denigrating the very source of their information as ‘granny’ or ‘gutless’ or ‘clueless’ while they, the brave ignorant ‘new media’ bloggers or ‘citizen journalists’ proceed to stink out the party, scanning for the next free tidbit to piss-take. To call them derivative is an understatement. But they see themselves as credible. Oh dear.*

Of course, not everyone sees the changing landscape that way. For instance, this well-written and interesting piece of argument about the end of the old model of news from Scotsman on a horse:

You can’t continue to monetize that dying monstrosity [newspapers/old media] with micro-payments and pay walls.
What you can do to help pay for it, however, is to get Steve Ballmer to drop loads of cash in your pocket as he feuds with his search engine nemesis, Google. And trust me folks, Ballmer has no choice. Google is going for Microsoft’s jugular.

Which is kind of the point. People count Microsoft out early at their peril. I’m no fan, but I wouldn’t run my carbon fibre catamaran up against their aircraft carrier too soon.

A good comment in the PC Mag piece above is “I will be the first to admit that the online content economy is broken. There are a lot of scared content providers out there who don’t know how to make money.”

* Jon Stewart and Stephen Colbert daily demonstrate their fine journalistic sensibilities (as well as brilliant sharp-edged satiric genius!) with well-researched balloon-bursting on their so-called comedy shows. Sometimes they take a whack at a seemingly-panicked ‘big media player’ (e.g. CNN fact-checking a Saturday Night Live sketch) or the bizarre partisan dishonesty and flatulence of Fox News. Breathtakingly good. My hat’s off to them. Golden.