Matthew Hooton and the exquisite agony of being a paid shill 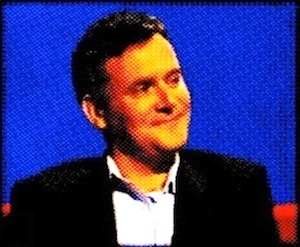 I’ve referred to spin doctor Matthew Hooton before — I positively delight in the shabby transparency of his gums-for-hire faux agitprop and the way he marshals an argument. He’s almost always accessible, usually very much in control of himself, except when overtaken by passion or appetite of some sort, and well, I find him just flat-out entertaining.

You may recall I referred to and posted a brief clip of his pre-election damnation of Green Party leader Russel Norman as [allegedly] a ‘confirmed Marxist Leninist’ who had (according to Matthew) ‘infiltrated’ the Green Party to make it appear mainstream while subverting it to socialist purposes (or gasp, to those of (communist?) Greenpeace global HQ!) I still believe he was being satirical. Surely.

Before waxing lyrical on politics earlier this week in his ‘commentator from the right’ gig at Radio NZ’s Nine to Noon show Matthew was pointedly asked at the outset to declare a conflict — his commercial connection — “I’m working with…” — (as a PR/’government relations’ hack? It’s not stated) to the Michael Fay led consortium seeking to overturn the government’s approval of a Chinese bid to buy 16 dairy farms formerly owned by the massively indebted Crafar family, now owned by their mortgagees.

Awkward. Here one of the National government’s chief apologists and demonizer of the left was, oops, publicly disagreeing with how Team Joyce had handled this sensitive matter and, double oops, finding merit in Labour’s position (if you can call it that).

It’s worth listening — if nothing else, for sheer entertainment value as cross-footed Matthew finds himself constrained from his normal effusive denigration of the left by his, um, …other duties.

But let’s not make too big a deal of it. I enjoy Matthew’s performances and he’s good at what he does. And perhaps I’ve got it all wrong. Perhaps with the election in the bag, Matthew feels he can dial back the venom against the government’s opponents and get back to the schmoozing he does so well. (His water carrier vitriol against anyone who dares criticize — read ‘expose’ — Key/Joyce apparent governmental duplicity* not withstanding.) 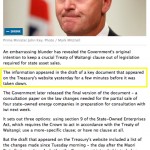 UPDATE: * Like this, for instance? Highlighted by Claire Trevett at the NZ Herald.