James Arthur Ray on trial for being a bully-boy 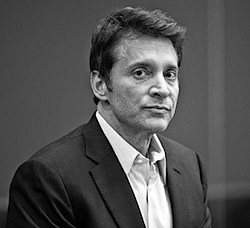 You may or may not be aware of the manslaughter trial under way in Arizona of personal development guru James Arthur Ray following the deaths of three people during/following a sweat lodge exercise on a pretty intense ‘Spiritual Warrior’ course led by Mr Ray.

Here is a document from the prosectors which forms part of their argument for the inclusion of an audio recording of the ‘Spiritual Warrior’ course as evidence of the build up of messages from Mr Ray to the participants and some of the extreme conditions he put them through in the lead up to to the sweat lodge, including confining them to a six foot circle in a desert for 36 hours without food and drink.

It attempts to answer the commonsense question: ‘If it was so hot and they felt so bad, why didn’t they just leave?’

Group psychology is part of the answer, and this document tries to show how the group and individuals in it were conditioned over a period of time. Cult-like obedience to the guru is a very powerful thing.

It makes awful reading, but read it. James Arthur Ray’s defence attorneys do not want this material set before the court. I think it’s highly relevant. Two extracts: 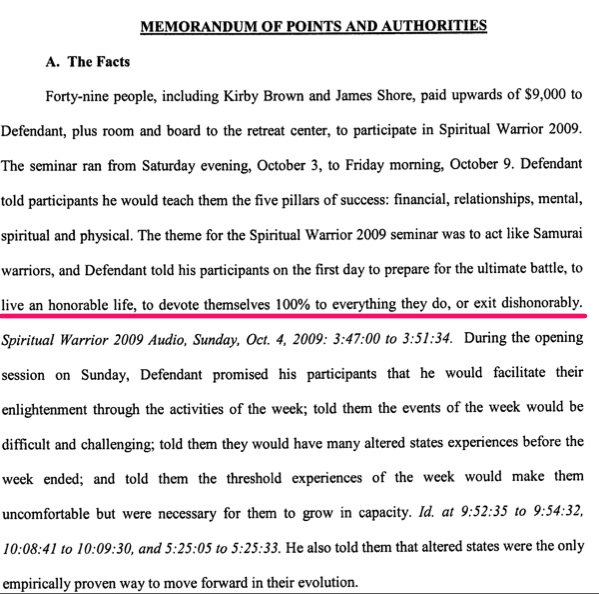 As-yet untested allegations by the Prosecution, but Gee, if true, it sounds really bad...

Full document available as a PDF (1.2MB) from the Arizona Supreme Court website.

It relates how James Ray described his ‘Spiritual Warrior’ training as an ‘accelerated learning program’. I’ve participated in plenty of those (including ‘Warrior training’ with a sweat lodge). As part of my training company, I’ve helped run genuinely accelerated learning teamwork and leadership programmes, and let me tell you, this one sounds nuts.

Anything that attacks individual sovereignty (i.e. choice) or this cult-like breaking down of people’s boundaries with the threat of shame and dishonour is bad — including the shitty little ‘Code of Silence’, ban on toilet breaks, and the Samurai Game, with James Ray ‘playing god’ — as described in the prosecution document (seriously, read it). It is manipulative and deceitful … and I don’t believe any good thing can come from it.

I’m all for challenge, especially in teams. I find them confronting, and I win some and lose some. (Sometimes I’m on ‘the learning team’ grmpf!) And sure, given the choice, I observe that some people will choose dignity over deliverance (but that IS their choice). Reading what the Prosecutors say was going on with James Arthur Ray’s ‘students’ (at $9,000 plus food and lodgings) makes me groan. The humanity. It looks like abuse of ‘authority’ and ‘guru-ship’. Deadly in this case.

I’m trying hard to give James Arthur Ray the benefit of the doubt, but I think like this potential juror, I’d be ‘de-panelled’ PDQ:

After [Yavapai County Superior Court Judge Warren] Darrow quizzed each of the eight [potential jurors], defense attorneys Tom Kelly and Luis Li singled out several potential jurors for extended examinations, focusing primarily on their search for bias against their client.
In one case, Li was able to ferret out prejudice in a woman who had a 22-year background in law enforcement.
“If you were sitting there in Mr. Ray’s shoes right now,” Li asked, “would you want you on the jury?”
The woman agreed she would not and was promptly dismissed for cause.
— Verdenews.com

Yeah, he wouldn’t want me on the jury either.