« An apology should cost you something
Against expectations »

Oh dear. Here’s a snap from the NZ Herald online this morning: 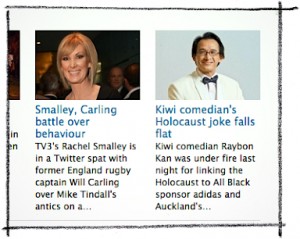 But is it news? He said, she said, shock horror.

Don’t bother reading them. So some people are having a Twitter conversation about an encounter between a rugby player and a (shock: blonde!) woman in a pub, and three days ago a comedian cracked a joke on Twitter about German transport efficiency which, when pressed, some people have expressed, what?, discomfort about. Big deal.

Don’t misunderstand, some stuff on Twitter is ‘newsworthy’, of course. Like Auckland mayor Len Brown tweeting that his train arrived on time at Eden Park last night… as part of a bigger story about Auckland transport passing the stress test.

‘Twitter reaction’ is a legitimate part of reporting on a bigger story, in my view. But when a story starts and finishes with an overheard ‘Twitter frenzy’ or ‘Twitter spat’ or ‘feud’ or ‘zing!’ … well, that’s pretty lame. Slow news day, NZ Herald?