Getting a narrative going 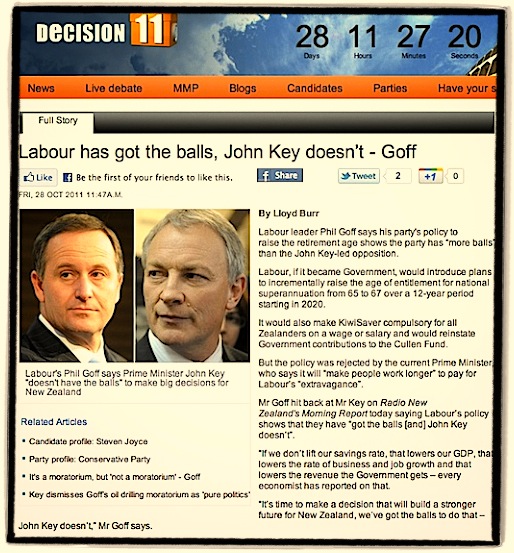 Sometimes, especially in an election campaign, the political reporter’s role is to stand out of the way and let the protagonists slug it out. Really, all we need do in some circumstances is let them say what it is they’ve prepared, report it accurately, and let the public decide.

Like most people, I’ve never seen John Key’s balls (and I don’t want to) … but it seems to me Phil Goff’s attention-seeking comment is aimed directly at the risk-averse incrementalism approach National has taken in government … despite what some point to as bold claims of brave and principled ‘leadership’ in Key’s 2008 election campaign.

Some lay this poll-driven timidity and hesitancy at campaign manager Steven Joyce’s feet. My own view is he’s not alone. It’s natural after nine years in Opposition to be transfixed by an urge: to-not-want-to-screw-it-up.

Another factor, surely, in the Key government’s arguably ‘cautious’ performance has been the series of once-in-lifetime, larger than life situations and disasters thrust upon the country. They, surely, would give anyone pause. 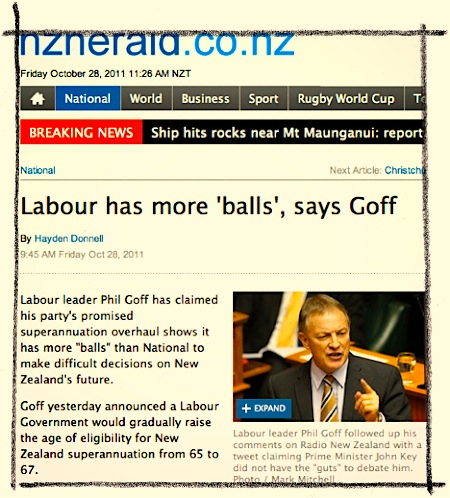 How the NZ Herald saw the same nugget (click)

It will be interesting to see how far the Labour message: ‘Labour haft more mmmm political courage’ line goes. It may strike a chord. Parties in Opposition really do have the luxury of speaking from principle … without much fear of being held to account — and fair enough too. There have to be some perks for losing an election!

Let’s admit this: pulling the ‘Raise the retirement age’ debate out right now DOES seem pretty bold of Labour. So does floating a Capital Gains Tax.

But, like the Mana Party — at least they’re emphasizing a point of difference with these policies. And getting talked about.