Flacks will always try this on. Resist. 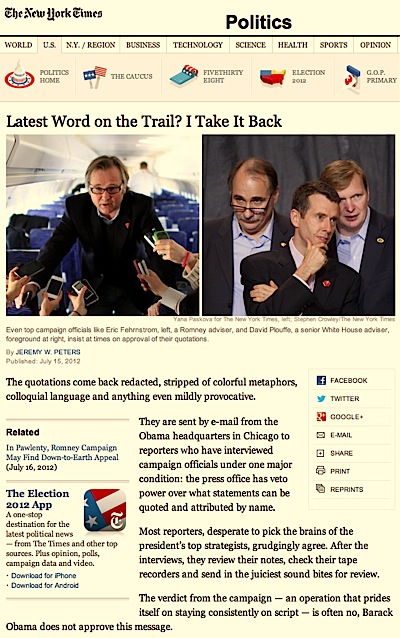 The New York Times reports in a vaguely-nauseating article ‘Latest Word on the Trail? I Take It Back‘ on the increasing use of ‘quote approval’ by the US presidential campaigns as a condition of interviews with people associated with the campaigns.

I’ve never agreed to that request when asked by ‘newsmakers’ at all levels, or their minders. It crosses a line. That’s not news, it’s PR …

Journalism is printing what someone else does not want printed: everything else is public relations
— George Orwell

An interview can be an adversarial event, or a collaborative one. But giving your subject a right of veto over any part of your article (as opposed to fact-checking) is a ludicrous loss of posture.
It also severs the fair expectation of truthfulness our readers/audience have a right to expect.

Who are you working for?

Many journalists spoke about the editing only if granted anonymity, an irony that did not escape them. No one said the editing altered the meaning of a quote. The changes were almost always small and seemingly unnecessary, they said.

Those who did speak on the record said the restrictions seem only to be growing. “It’s not something I’m particularly proud of because there’s a part of me that says, ‘Don’t do it, don’t agree to their terms,’ ” said Major Garrett, a correspondent for The National Journal. “There are times when this feels like I’m dealing with some of my editors. It’s like, ‘You just changed this because you could!’ ”